BOZEMAN – Scientists at Montana State University’s Western Transportation Institute and their influential research on the world’s largest complex of wildlife crossing structures were featured in a recent article in Canadian Geographic magazine.

The complex, a series of tree-covered overpasses and earth-lined culverts perforating a roughly 51-mile stretch of the Trans-Canada Highway through Banff National Park, has been a focus of study for Tony Clevenger, a senior research scientist at WTI, for nearly two decades.

“This is Canada’s biggest conservation success story,” Clevenger is quoted as saying in the Dec. 4 online article, titled “As Banff’s famed wildlife overpasses turn 20, the world looks to Canada for conservation inspiration.” The article recounts the construction of the structures since the 1980s and cites Clevenger’s “17 years-worth of data proving the efficacy of the crossings.”

According to Clevenger, nearly a dozen species of large mammals have used the Banff structures more than 150,000 times and the mortality rates for large carnivores such as grizzly bears are now 50 to 100 percent lower where the crossings have been installed.

“We know these structures work and that there are cost benefits” in terms of reducing animal-vehicle collisions and conserving wildlife, said Clevenger, who joined WTI in 2002 after working independently on the Banff research for roughly five years.

To document how wildlife used the crossings, Clevenger and his colleagues used motion-activated cameras as well as pads of sand, which were routinely checked for animal tracks. They also used unobtrusive barbed wire to collect hair samples, which were then genetically tested to determine, for example, how many individual bears had used a crossing. 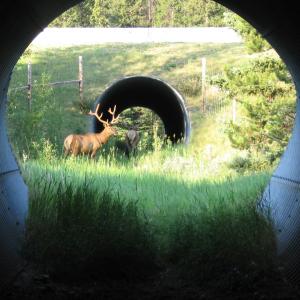 Combined with information gathered by Parks Canada biologists, such as data from radio collars showing how animals moved across the Banff landscape, Clevenger’s research influenced the location and design of subsequent crossing structures as the Banff project expanded along the Trans-Canada Highway, according to Terry McGuire, who led the project for Parks Canada from the early 1990s through 2010.

“The research told us that wolves and grizzlies favor overpass structures,” so in the most recent iteration of the project the overpasses continued to be used and were actually widened, he said. “The smaller underpasses are preferred by cougars and black bears.”

Taken as a whole, Clevenger said, the research translates relatively simply so that it can be applied by transportation agencies, and the WTI team is studying its potential to work across different ecosystems as well.

When Clevenger joined WTI in 2002, other researchers at the institute, which is housed in MSU’s College of Engineering, had just begun studying wildlife movement across Highway 93 on Montana’s Flathead Indian Reservation. That research helped pave the way for numerous crossing structures similar to the ones at Banff. Clevenger said he was drawn to WTI by the Highway 93 project and the center’s early support for the emerging discipline of road ecology, he said.

“I think WTI is looked upon as being the premiere road ecology research center in North America,” he said.

According to the Canadian Geographic article, Clevenger’s research played a key role in overcoming early skepticism about the Banff project and, more recently, turning it into an example that others around the world seek to replicate.

For example, the article quotes another WTI researcher, Rob Ament, as he describes the response of Chinese visitors to WTI several years ago: “Everyone in China knew about Banff. When Tony took to the stage, they all pulled out their notepads and started writing like crazy, every word he spoke. Clearly, Banff has cachet all over the world.”

According to WTI Director Steve Albert, the institute has conducted research about wildlife crossings in nearly 30 countries, including China, as well as the majority of U.S. states. “MSU is driving road ecology research worldwide,” he said.

“People often don’t realize how big a problem this is,” Albert added. “There are more than a million wildlife collisions every year just in the U.S. They have a huge economic impact” in terms of vehicle repair costs and labor for removing carcasses from roadways, among other things, he said.

Ament is featured in the article for his research that involves applying the findings from Banff and other projects to designing new crossing structures in developing countries like Argentina, where new roads are being built in areas with lots of biodiversity.

“That’s why this research is so important,” Ament said. “There’s so much more to learn. We’re just starting.”