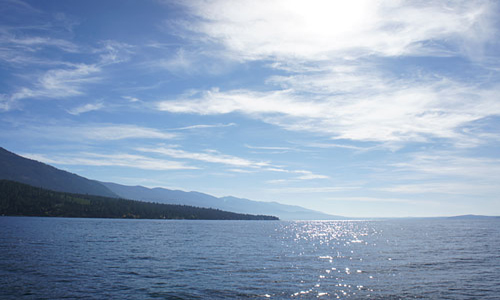 Poor lake whitefish bite on Flathead this year
By Hookemharry

The Whitefish Jigfest fishing tournament was held on Flathead Lake last weekend. The end results of the tourney basically told the story that all whitefish anglers already knew. The whitefish are tough to catch this year.

“We only had 69 anglers compete this year, mainly because leading up to the tournament fishing had been very poor,” said tournament organizer Gene Fincher.

Those 69 fishermen only entered a disappointing 13 fish for the three-day tourney. Nick Tucker, from Lakeside, caught the largest whitefish to take first place with a 3.33 pounder.

Why is the bite so poor this year?

Jim Vashro, regional fisheries manager for Montana Fish, Wildlife and Parks in Kalispell, recently sent an e-mail that attempted to explain why the whitefish bite is so poor.

“It basically boils down to two spring storms that took place on Flathead Lake, one in April and the other in May,” he said. “In the summer, concentrations of Lake Whitefish are feeding on huge schools of young of the year yellow perch.

“Yellow perch spawn in Flathead Lake from mid April into May when water temperatures reach 45-50 degrees,” Vashro continued. “Perch spread their eggs over aquatic vegetation in 5-10 feet of water; a single female can produce 10,000 to 50,000 eggs. Eggs incubate 10-20 days before hatching.

“Strong cold fronts during that time can drop water temperature enough to kill developing eggs or wave-caused turbulence can knock eggs into the sediment where they smother,” he said.

“Spring, 2009, had two strong storms. One was around April 20 with temperatures near freezing and winds to more than 20 miles per hour which probably killed all eggs to that point,” Vashro added. “There was another strong storm around May 10 that dropped snow and probably killed any attempts at late spawning.”

Vashro said that in a better year, perch will hatch and spread across the surface of the lake by the millions. Around mid July the young perch are 1 inch to 1 ¼ inches in length. At that time they start to form large schools and drop to the bottom on weeds and gravel patches in 35-40 feet of water.

“Lake Whitefish normally feed on insects and small clams but they happily take advantage of this perch food source, along with lake trout and probably larger perch,” he said.

That sums up the reason for the poor lake whitefish bite. . If you would like to read Vashros complete e-mail log onto www.montanaoutdoor.com.

Speaking of Whitefish and other fish that contain white meat like walleyes, northern pike and bass.

Fincher noted that when you run a tourney and only 13 fish are turned in you have time to do other things like come up with a new fish recipe.

Fincher tells me that if you bring Sprite to a boil – yes, the soda pop Sprite – and then put your fish chunks in the pot and bring it to a boil again, you won’t believe how good whitefish taste.