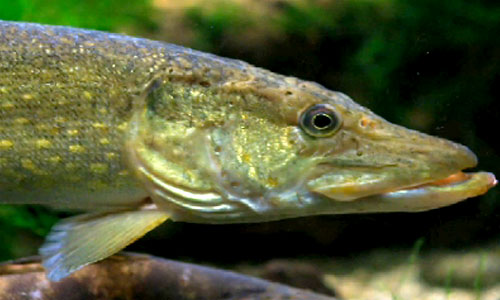 Big catch for angler on Seeley Lake
By Hookemharry

Too bad the big catch was a bit early for Seeley Lake’s annual Pike On Ice Tournament, but that doesn’t matter to Jaylund Rammell and his daughter Kaylee.

Last week, the Rammell’s were spending time ice fishing on Seeley like they always do this at time of year. They were using tip-ups, baited with smelt.

Jaylund told he his daughter likes to see the fish trip the orange flag on the tip-up, run over to them and then hand-line them in. This time, however, Jaylund decided that the fish on the other end of the line might be a little big for young Kaylee to handle.

“So I started to pull the line in and it took a while as the northern pike had taken out quite a bit of line before it stopped,” said Rammell. “In fact there was a couple of times that I thought I lost the fish as it was swimming towards me.”

But Rammell could feel it was a heavy fish. “So when I got the pike up to the ice hole there was a nearby fisherman who said he would gaff the fish to help me get it out of the water.”

It was a good plan to put a big fish on the ice. “But I guess when he saw the size of the head of the northern pike come up, it must of surprised him because he didn’t move,” Jaylund said.

“Then his buddy decided to grap the fishing line in all the excitement and the line ended up breaking,” he added. “But we had it out about half way out of the ice hole when the line broke so I grabbed it and got the whole fish on the ice.”

And what a fish it was. The northern pike measured 44 inches and weighed 30.7 pounds.

It was certainly worth the excitement and was the biggest northern pike that Rammell had ever caught. He wants to thank the other two guys who came over and lent him a hand.

I asked Rammell what he was going to do with it and he told me that it already was at the taxidermist for mounting. You can view the big northern pike on the home page of www.montanaoutdoor.com. The pike, as you will see, is about the same length as Kaylee is tall.

Now, we get to see if anyone can come close to matching the big pike during this coming weekend’s Pike On Ice tourney on Seeley and Salmon Lakes. To enter the Jan. 16-17 tourney, you can e-mail toby@pikeonice.com or call him at 370-8396. Entry fees are $25. The tourney offers $1,000 in cash and prizes.