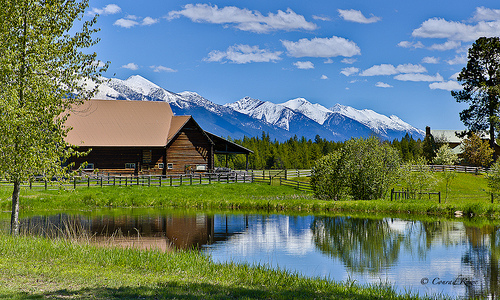 What will the New Year bring for outdoor sportsmen and women?
By Hookemharry

The New Year is underway!

For one thing, changes in hunting season regulations are among the hot topics that will shape our outdoor futures. Montana Fish Wildlife and Parks will be discussing the 2010-2011 season in meetings all across the state in the coming weeks.

These meetings have already started this week and will continue until January 21, with the final public meeting for Region 2 to be held in Darby at the high school cafeteria. For a complete listing of the meetings and dates in your region long onto www.montanaoutdoor.com.

Some changes were suggested at meetings last summer by hunters, landowners and outfitters. the f sportsman and women.

Statewide, there are changes in opening season dates. The general deer and elks season would open on Saturday, instead of Sunday. There could be a state youth deer hunting season on third Thursday and Friday of October. And, the opening day of the general antelope season would go to the Saturday of Columbus Day weekend, rather than Sunday.

Each Region will also have region-wide issues that will also be addresses during these meetings.

It’s the start of a new year, a new decade and a good time for us to evaluate how we would like the hunting landscape shaped in Montana. Your voice needs to heard.

If you are unable to attend the meetings, then e-mail your comments on the proposed changes. All of the proposed changes are on the FWP web site at www.fwp.mt.gov under recent public notices: request for public comment-2010-2011 hunting season proposals-interested persons letter.

Anglers who enjoy fishing Flathead Lake for lake trout will also have an opportunity to comment on a Draft Pilot Project to reduce lake trout numbers.

The purpose of this pilot project being prepared by the Fisheries Program of the Confederated Salish and Kootenai Tribes (CSKT), is to answer the question of whether we have the ability to cost effectively reduce lake trout population in a reasonable period of time to benefit native fish while not compromising the recreational fishery of Flathead Lake.

The goal of this Pilot Project is to reduce the high numbers of lake trout less than 26 inches in total length by 25 percent by 2012 by using a combination of anglers (including fishing contests) and netting.

Based on comments I’ve heard, the key issue on this one for anglers is the netting, how it will affect lake trout themselves and the by-catch it may produce on bull trout, cutthroat trout and other species.

This draft is coming out because the current Flathead Lake and River Fisheries co- management plan between the CSKT and Montana Fish Wildlife and Parks expires at the end of this year.

In a statement last month from FWP promises that all stakeholders will be involved in the next planning process, but it is important for CSKT and FWP, co-managers of the lake, to agree on this phase of Flathead Lake management before completing a new planning process.