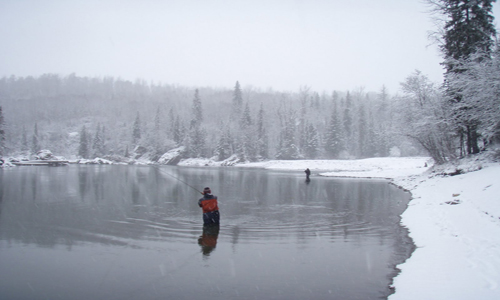 I spent last weekend in snowy Helena finding out how the ice fishing is in the area. The reports that I received were very mixed.

“I have heard that the trout are biting very well on the south end of Canyon Ferry,” said Jim Willard ,who for his real job, is the sales manager for a local radio station in town and but also known as the “Fishing Wizard.”

Willard has not had a chance to get out much this winter but he knows ice anglers who have and, for the most part, fishing has been fair over on the reservoirs next to Helena. “Walleye fisherman seem to have the best luck fishing the causeway on Hauser Reservoir,” added Willard. “The ones I have talked to like jigging a perch-looking Rapala.”

I heard that they received about a foot of snow in Miles City last weekend and while we were doing the Montana Outdoor Radio Show last Saturday morning, Mary Beth Kibler called from the Jordan area and reported that they had received four new inches on the ground and it was still snowing.

We sure could use the moisture over in the Western Montana mountain basins with some of them reporting half the normal snowpack for this time of the year.

. “The last week was slow for the folks that have registered for the Pounder but I have a feeling that it will be picking up for the second half of the derby,” reported Gene Fincher, the organizer for the annual February ice fishing derby that is good for all lakes in Region One. Contestants can register their perch at the Scoreboard Pub in Kalispell seven days a week.

The Perch Pounder will conclude Saturday Feb. 27 at 3 p.m. so anglers still have plenty of time. They can enter anytime. Just call Fincher at 406-261-6445 for more information.

I received a note from Mike and Connie Strang the owners of the Mountain View Motel in Lima. “Lots of ice fishing huts on Clark Canyon Reservoir”, is all the note said, which was written on the back of their business card and stuck in my pick up window last Saturday while my truck was parked in Helena. You never know but that might be a good indication the ice fishing for trout and ling is good on Clark Canyon south of Dillon.