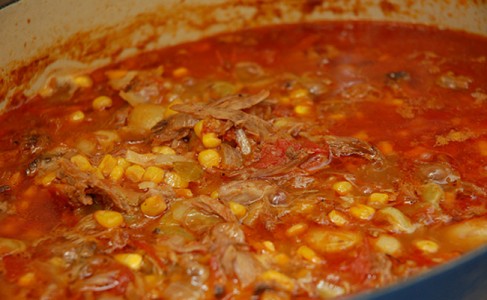 Meat of choice — ( 3 ea. if rabbit or squirrel is used-be sure to debone when done cooking) or three pounds other game meat.

Half stick butter or margarine

Six cups chicken broth if squirrel or rabbit is used

Put bacon and butter in large Dutch Oven or pot set on medium heat and melt butter. Now take quartered rabbit or squirrel or meat of choice and mix with flour in a zip lock bag and coat well. Salt and pepper to taste. Brown on all sides. If using small game let simmer in all ingredients,(about ninety minutes) except for the potatoes,corn and beans, until tender, then remove from bones. If using venison, elk, antelope or buffalo let all ingredients simmer for ninety minutes or until tender. Now add the lima and green beans,corn and potatoes and cook until potatoes are done. Stir frequently so mixture does not stick to bottom of pan. Should feed at least eight to ten hearty appetites. It should have a thick consistency. If needed add more flour to cold broth, mix well and add to stew, this will help it to thicken. Serve with fresh hot bread and enjoy.