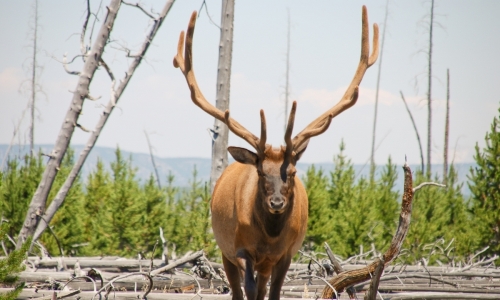 December will be remembered for its snow and colder temperatures For once in a long while, the weather was just what ice anglers and snow-goers ordered. I even got out a couple of times with my kids to help them enjoy sledding on local hills. It was a great way to end a good year.

My hunting season saw all my tags being filled along with my freezer.

And for the first time in many years I was able to fish Fort Peck Reservoir not once but three times last year, and every trip except one ended up being great for catching fish. I was also fortunate to spend a few days fishing Holter Reservoir and had a great time catching limits of trout and walleyes several days.

My statewide hunting and fishing Montana Outdoor Radio Show just finished its 12th year on the air with more stations airing the Saturday morning program than in any previous year. In August, we did a complete overhaul of our website, www.montanaoutdoor.

com, and we started a Facebook page that now has more than 1,000 fans.

Yes, 2010 was a good year, with the exception of one extremely sad event.

In May, we lost a very important contributor to our radio show and website. Mark Henckel, who was the outdoors editor of the Billings Gazette, died of a heart attack at the age of 60. Mark was a very good friend of mine, as well a valued adviser.

Henckel and I met after the radio show first aired in March 1999. In his position at the Gazette, he was the go-to guy in Montana when the topic of discussion involved hunting and fishing.

It was a natural for me to seek him out for input on what to cover with my show every week. We had a lot in common. Both of us were from the Midwest and loved to hunt and fish.

Henckel’s passion for fishing could be summed with one word – walleye. Even though we both liked to fish every species the rivers and lakes that Montana has to offer, we both really loved to fish walleye.

When the radio show started 12 years ago, we also launched our website. Henckel was involved from the very beginning. Working together just came natural us.

So it was 12 years ago that we began a business relationship that lasted until that tragic Saturday morning in May. His guidance was instrumental in making www.

montanaoutdoor.com one of the best online sources for hunting and fishing news in Montana.

I said it shortly after his death, and it deserves repeating: Mark could have been my father, uncle or brother, but he wasn’t, he was my friend. He will always be remembered as an important part of the Montana Outdoor Radio Show. Mark will be missed by me and all of Montana sportsman and women in 2011 and years to come.