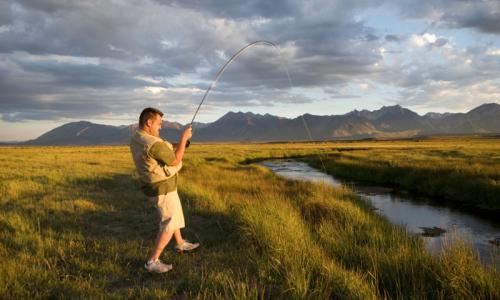 The Montana Fishing Season has Opened
By Hookemharry

The Montana fishing season opened last Saturday. Most of the anglers that I talked to were not on the rivers because of the high water. Anglers fishing at area lakes reported some success. The kokanee salmon season on Lake Mary Ronan started off strong. “We had a couple of folks that stayed in our cabins come back with their limit of salmon by 10am on Saturday morning”, added Mark from Camp Tuffit, “but the salmon are smaller in size this year than they were last year” Anglers had luck fishing over by the Tamaracks area on the lake. That fishing report was a lot better than the one I received from Georgetown Lake. “The ice is 12 inches thick on some a parts of the lake”, said Bill from the Sunshine Station in Phillipsburg. The only open water on lake is in the area on the lake that is closed to fishing till July 1st. How long with Georgetown Lake have ice on it? “I don’t how long it will take to get the ice off it all depends on the sunshine and wind”, said Jeff from Seven Gables, “the longest the ice has stayed on the lake in the 20 years I have been here has been June 6”.

It was walleye tournament time last weekend on Fresno Reservoir. The 2011 Fresno Walleye Challenge took place with a nearly 100 two person teams competing. Brian Olson of Havre and Dan Chovanak from Helena held on to take the top team honors with a 19.8 pound total for the two –days. “Some teams would tell you that it was definitely a challenge and even more challenging on day one,” reported tourney organizer Dale Gilbert from Ulm. The weather was a factor with rain and light winds most of day one. Walleye fishing has been slow this spring. The weather cold fronts and storm systems that having been moving in the state every two days or so have had an effect on the bite. It has been hard to get your boat in Canyon Ferry Reservoir on the south end. Canyon Ferry Reservoir is the first reservoir on the Missouri River and it is used for flood control so the water level has been very low in anticipation of the run-off that is happening now. However you can launch a boat on the north end of the reservoir. The trout fishing is still good for boat trollers and shore anglers. A few walleyes are being caught on the south end of the reservoir. Hauser and Holter Reservoirs’ are both reporting good trout fishing and slow walleye fishing. Look for the walleye fishing to pick up as the water temperatures start to warm and the spring time weather starts to become more stable.

The walleye has picked up on the Dry Arm on Fort Peck Reservoir according to Bill at Rock Creek Marina.

Fort Peck Reservoir continues to rise. As recently as last Monday the reservoir was receiving approximately 30,000 cubic feet per second (cfs) of water and the dam was releasing 20,0000cfs. John Daggett the Operations Project Manager for the U.S. Army Corps of Engineers, expects the releases to increase in June because of mountain snowmelt and rain. The spillway at the dam is in use since the first time since 1997.