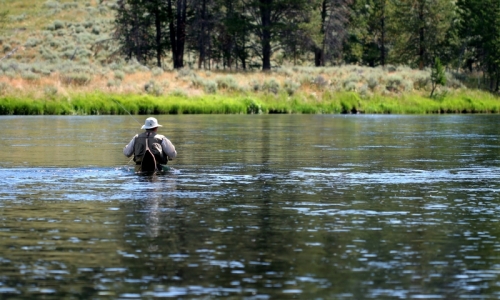 During a normal year I would suggest to all the anglers that want to learn how to fish for walleyes and actually catch some to try their luck on Canyon Ferry Reservoir in June. Well as you already know this year is anything but normal when it comes to weather. The excess water has had a negative effect on big reservoirs like Fort Peck as is evident when Rock Creek Marina announced last week that they would have limited services through the rest of the summer due to flooding.  Closer to home but still on the Missouri River is Canyon Ferry where flooding right now is not a problem. Up until the last two weeks boat anglers couldn’t even launch their boats on the south end of the reservoir. The water had been drawn down in anticipation of a record run-off. Now the reservoir is about two feet from full pool and should be full by this weekend. The muddy water that is flowing in from the Missouri is also carrying with it a lot of debris. “You really need to keep your eyes open for all kinds of debris”, added Bob Culp from Frenchtown, who has fished the reservoir with limited success the past few days, “it is also tough to fish with all that debris floating around”. Dirty water and floating logs are nothing new for walleye anglers to contend with while fishing the south end in front of the ponds on Canyon Ferry. But normally by this time of the year the debris is gone. This weekend marks the annual Canyon Ferry Walleye Festival. !50 teams will compete for a $10,000 first place cash prize. Most of the tournaments in the past have seen the most successful teams fishing the south end. This year with the hot fishing bite pushed back about thirty days on the lake most teams fishing the tournament might have to catch their fish up north between Hole-In-the-Wall and White Earth away from south end. As I have always done for 13 years I will be broadcasting the Montana Outdoor Radio Show live on the water this Saturday morning from 6-8 to kick off the tourney, my special guest will be Adam Strainer, Fisheries Technician from FWP.  The good news is that most anglers that I have talked to are starting to catch walleyes. The locations vary but the north end of Pond 1 and north to the shorelines and points in the middle of the lake seem to be producing as well as most areas.

Holter Reservoir is still fishing well for trout. The trout are a little deeper about 15 feet than they were in the spring. The water is warming up and the walleye fishing is also starting to pick up. “I fish for about 6 hours on Saturday with a floating jig head tipped with a leach and pick up four”, said Jim Johnson from Lincoln. Johnson was fishing in the Oxbow Bend area of the lake.

The kokanee salmon still biting on Lake Mary Ronan according to Mark at Camp Tuffit. “Salmon are still biting with most anglers jigging for them in 25-30 feet  of water, but the perch fishing is slow”, he said.