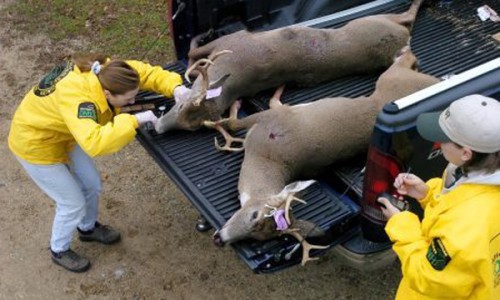 Region 5 – The number of hunters who stopped at Montana Fish, Wildlife and Parks check stations and the number of animals harvested over the weekend were at a historic low for the fourth weekend of the general hunting season.

The number of hunters who stopped at the Columbus, Big Timber and Lavina check stations was down 18 percent from the same weekend in 2010. Only 24 percent of hunters brought home game – slightly more than half as many as last year.

At the Lavina check station, FWP wildlife biologist Ashley Beyer said hunters reported difficult hunting conditions – including high winds, blizzards and 4 to 10 inches of new snow – in the Little Belt and Snowy mountains. The result was 15 percent fewer hunters than the same weekend last year and a harvest success rate of just 17 percent – the lowest on record for the fourth weekend of the season.

Here are some FWP Region 5 statistics from the fourth weekend of the 2011 season:

At Big Timber, FWP wildlife biologist Justin Paugh said winds were sustained at 40 miles per hour with a gust of 70 miles per hour Sunday. As a result, the Big Timber check station set new fourth-weekend record lows for numbers of hunters, deer and elk and harvest success.

Hunters reported that the wind kept animals in deep cover and difficult to find, Paugh said. On a positive note, all of the mule deer and 71 percent of the white-tailed deer brought to the Big Timber check station were mature bucks – an indication that the annual rut is in full swing.

At the Columbus check station, FWP wildlife biologist Shawn Stewart reported the busiest weekend of the season with nearly the same number of hunters as last year. And the success rate of 41 percent was just under last year’s harvest.

For the year, Stewart said, the number of hunters who stopped at Columbus was 6 percent below the long-term average. The number of checked mule deer is only two-thirds of average while the white-tailed deer (mostly antlerless) and elk numbers are well above average. Overall for the year, hunter success recorded at Columbus is 41 percent – exactly equal to the historic average.

The Laurel check station does not operate during the fourth weekend of season. Montana’s general deer and elk season runs through Nov. 27.