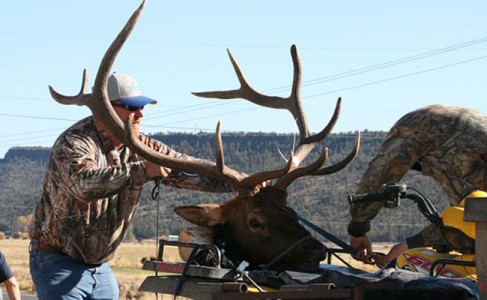 Region 5 – After a slow start to the 2011 big-game general hunting season, the number of hunters who went to the field picked up significantly in south central Montana for the closing weekend.

But statistics gathered at Montana Fish, Wildlife and Parks check stations during all six weekends of the season showed that, with a few exceptions, 2011 will go down as one of the slowest on record in FWP’s Region 5 for the number of hunters and the overall amount of game harvested.

At the Columbus check station FWP wildlife biologist Shawn Stewart said he saw the largest number of closing-weekend hunters in eight years. However, for the entire season, the number of hunters was eight percent below the historic average.

For the second year in a row, Stewart said, the number of white-tailed deer and mule deer that came through the Columbus site were nearly identical, which is an anomaly from the long-term trend. Normally mule deer far outnumber white-tailed deer harvested along the Beartooth Front.

Mule deer populations west of the Stillwater River continue to feel the effects of the Derby Fire, which destroyed habitat along the mountains and foothills south of the Yellowstone River in 2006. Meanwhile, white-tailed deer in the area were unaffected by this year’s outbreak of EHD, a fatal disease that hit other parts of the region, Stewart said.

The elk harvest was a bright spot at the Columbus check station, where hunters brought in 75 percent more animals than the long-term average.

The 2011 general deer and elk season ended Sunday. Here are some statistics for the final weekend of the season and for all of 2011:

At the Laurel check station, FWP wildlife research specialist Jay Watson said the number of hunters improved to nearly normal levels for the final weekend of the general big-game season. And hunter success improved from earlier in the year as 41 percent of those who stopped at Laurel had harvested animals.

At the Big Timber check station, FWP wildlife biologist Justin Paugh reported that all statistics were lower than average for the 2011 general season.

Despite comfortable temperatures and bearable wind speeds during the last weekend of the season, he said, the white-tailed deer numbers were down 25 percent from 2010 and the elk harvest was 55 below last year. Mule deer numbers were 9 percent higher than last year.

For the entire year, Paugh said, the Big Timber check station set new historic lows for numbers of hunters, numbers of deer and percent of hunters with game. While the elk harvest was down from last year, it was near the long-term average.

At the Lavina check station, FWP wildlife biologist Ashley Beyer reported a strong finish to the season with 11 percent more hunters than the final weekend in 2010. Those who stopped at the check station were slightly less successful than during the same weekend a year ago, however. Both the white-tailed deer and mule deer harvests were about half of normal for the final weekend.