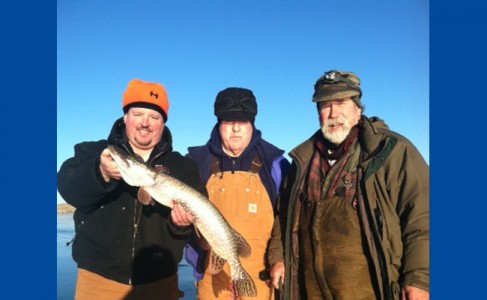 Captain’s Column: In Search of Ice
By Kjel

January is supposed to be an “Ice already on the lake” month in Montana. The month of December? It’s the month that the ice starts to form and take hold on lakes across Montana. That ice leads to some good ice fishing for the months of January and February. That is what normally happens but as we have comes expect when it comes to weather in Montana the term normal doesn’t always apply. Some lakes have had good early ice. Lakes like Georgetown and Lake Mary Ronan have had good ice but lakes over by Helena and farther east have struggled to get a thickness of ice that is safe to walk on let alone drive an ATV or snowmobile on. For the first time this year I went in search of some good ice conditions I took the opportunity to head east last week to hopefully ice fish on Nelson Reservoir. Nelson is located 20 miles east of Malta on Highway2 and is also home to the Sleeping Buffalo Hot Springs. A resort where in 1999 Hi-Line Promotions actually made the world’s largest hamburger. That hamburger that was made out of Montana pure beef reportedly weighed 6040 pounds and it made the Guinness Book of World records. It just goes to show that one never knows what they will run into in search of good ice in Montana. And there was good ice on Nelson Reservoir; about 12 inches of ice covered the lake. So Jim Johnson and Denny Peterson from Lincoln and Sauger Steve Knudson from Billings and I set out to catch some fish. Nelson is known for its northern pike and walleye as well as perch fishing. Anglers may use live minnows and each angler is allowed 6 unattended lines. So as you might imagine it took a little bit of time to drill 24 holes and set up all the tip-ups that we were using and tip each of them with a live minnow. The game plan was to spread the tips-ups out in a number of areas on the lake. The difference in depth we would place the lines and the size of minnowsthat we would tip them with varied as we set them up. The deeper the depth the smaller the minnow. The shallower the depth the larger minnow. Walleyes for the most part would be caught in the deeper depths and the northern pike we would target would be in the shallower water near the weed-lines. Pike tend to run with the bait once they take itso when we set the lines up shallower we also distanced them from each other more. All of the lines would be set about a foot to a foot and half off the bottom in depths ranging from 8 feet out to 24 feet. Our strategy worked for the first 24 hours. We landed over a dozen pike and about a half a dozen walleyes. The fishing slowed as a cold front moved in the next 24 hours. Even with the slower fishing it was a lot of fun to finally get on the ice again. You can view pictures and a video of the trip online at www.montanaoutdoor.com