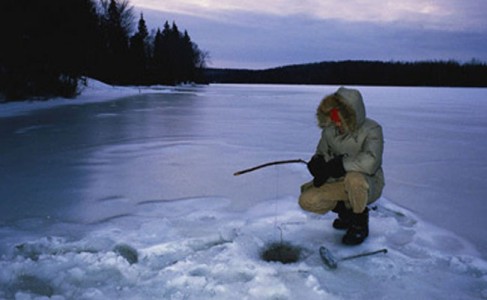 Western Montana Ice Fishing Report From the MacMan
By Kjel

Pablo Reservoir was great fishing on the day it opened. The fish are running larger than last year with about 1 out of every 3 fish being fillet sized. Folks fishing in front of the outlet did the best in a 20 foot depth. Rance Hertz had success using a 1/8 oz Double Treble Trilobite below a flash ‘n’ Glo. Jens Gran also did well with the Double Treble. The only difference being Jens was baiting with cut perch while Rance was using eyeballs. Donna Wilson who was partnered up with Rance did great with a Salmon Ready to Go which she likes to use everywhere for everything. Alvin Hass from up the Bitterroot had best results using an end pull Fire Tiger color Willow Jig.

I had Jaron Vibond and his mother Vanessa fishing with me. Jaron caught his first fish ever and to top the “beginner’s luck” he also caught the biggest fish of the day. It was Vanessa’s first time ice fishing and she was also having a spurt of “beginner’s luck” out fishing the Macman.

When I arrived at Pablo Reservoir there was a young fellow and his son on their way off the ice. They had a sizeable catch of perch. He’d been in the store the day before buying Double Trebles saying that was the only lure he was using as of late. He’d even caught a 30” pike out at Lone pine Reservoir on it. I assumed that was what he’d been using but he said “no”. When he was in the store I’d given him one of our newest creations – an “all-eye”. He said that was working best until a big perch broke it off.

In the recent past I’ve been trying my hand at Crappy fishing in McWeggener Slough on Hwy 35 near Kalispell. Having caught only one Crappy in Blanchard Lake near Whitefish previous to this season I’m definitely not an expert but I’d heard that a small jig with a big eye was a good way to go so I flattened a small center balanced jig we call a Water Rat. This produced a relatively large round flat surface all of which became an eye, thus the “All-Eye”. In McWeggener as well as other lakes I’ve fished recently it’s been without equal. Because it is a light lure, I’ve been fishing it with 3 lb. test maxima leader and 3 lb test Power Pro Ice Blue Braid.

In the three weeks of its existence I’ve caught Crappie, Bass, Pike, Perch, sunfish and Bullheads on it. Yesterday, Sunday the 15th, my son Andrew switched from a Trilobite Double, Flash ‘n’ Glo combo to an “All-Eye”. I asked him why the change and he said, “Because you are smoking me.”

The recent cold weather has reset the ice on local lakes. It also looks like East Bay on Flathead Lake has refrozen. There was both good perch and Lake Trout fishing there earlier so t hat should continue. As perch approach their spawning season (early spring) they begin to feed heavier. Pablo Reservoir, Crow Reservoir, Ninepipe, Lake Mary Ronan and East Bay are all good bets for these good eating scrappers. If you catch some and need some processing instructions bring them by us at Zimmer Tackle and if I’m here I’ll be happy to show you my filleting technique.

Two contests I intend to fish this winter are the McGregor Lake Rainbow and Lake Trout Tournament with 100% return on prize money coming from a 15.00 entry fee and The Lake Mary Ronan Perch Assault with a 150.00 entry fee per 2-man team with a 10,000.00 purse if all the team positions are filled. The Perch Assault is a very well-organized professional type tournament. The McGregor Tournament is February 11th and 12th

The Lake Mary Ronan Perch Assault is 3rd and 4th of March.

For more information call us at: 406-675-0068(Zimmer Tackle Store) or my personal cell is: 250-0241. Email us at: macman@ronan.net Specify if you’d like to be included on our fish report list. For our product line check out our website at: www.zimmertackle.com