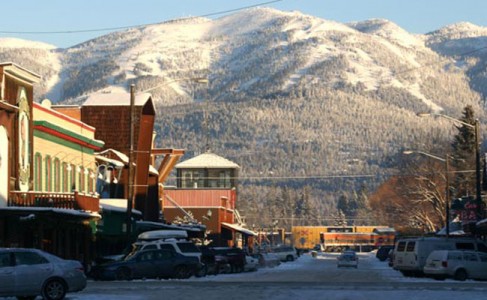 Once winter arrived in Montana a couple of weeks ago my interest started to peak in going to one of Montana’s ski resorts. A couple of days before the snow hit Western Montana my girlfriend, Berny Croy, and I decided to take our first ski trip of the season. We headed for the local favorite Missoula hill Snowbowl. My buddy Doug Stewart of Missoula also made the day ski trip and it also was his first time skiing this year too! The day we went the cold front that would eventually bring over a foot of new snow to the Missoula Valley floor was just starting to enter Western Montana. On the day we hit Snowbowl the temperature was 3 degrees on the top of the hill and 11 degrees down by the lodge for most of the day. The skiing conditions were fair and we had a great time. Since that time Snowbowl has received enough snow to make skiing actually seem like their billboards around town have been advertising. Lots of powder with snow flying everywhere.

Last weekend Berny and I made our way to Whitefish Mountain Resort. William my 9 year old son and one of his buddies Reggie Duce also went along for a mini ski vacation. We stayed at the Lodge at Whitefish Lake, which is only a 5 minute shuttle ride to the base of the hill. Whitefish Mountain had not received as much snow as Snowbowl the past two weeks but the mountain has received enough snow to make skiing conditions ideal. Most of their 98 runs were open and the majority of those runs had been groomed. It has been a few years since I had the opportunity to ski Whitefish Mountain in fact the last time I made it to the summit on top of the mountain it was called Big Mountain. The mountain has more of corporate feel now than the more local Big Mountain I remembered. In any case it was a great weekend to ski with my family and a lot of fun to experience the neat town of Whitefish. Incidentally they are celebrating their Winter Carnival this weekend in Whitefish which explains why the city still had all their Christmas lights and decorations up around town. If you have not skied this year now is the time, all the ski resorts in Western Montana are experiencing some great conditions, including Lost Trail and Lookout Pass.

Some 50 plus 2 person teams are heading down to Hebgan Lake this weekend to ice fish a tournament, which is an official North American Ice Fishing Circuit event. The weekend which begins Friday night with a ice fishing seminar and continues Saturday with a kids ice camp with the ice fishing tournament taking place on Sunday. There is still time to enter if you can make the mandatory rules meeting at 7pm Saturday night. Entry fee is $200 per team. For more information contact the Kirkwood Resort and Marina at 877-302-7200 which is located on the North Shore of Hebgan Lake. Their web site is www.westyellowstoneicefishing.com