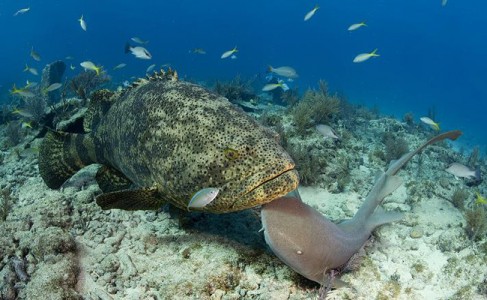 Brandt Hamernick, of Missoula, and his girlfriend, Tracy, went fishing off the Florida coast at Fort Meyers. It is an annual trip that Hamernick takes to spend time with his folks who have a place in Florida. When he is not golfing, he spends his time, in the Sunshine state, on the water fishing for anything that will bite. Tracy caught this short video of Hammer pulling in a Goliath Grouper. To top it off the 220 pound Grouper was caught and released the day Hammer was also celebrating his birthday.

Groupers can get quite large. Here is a description of this deep seas fish. Groupers are teleosts, typically having a stout body and a large mouth. They are not built for long-distance fast swimming. They can be quite large, and lengths over a meter and weights up to 100 kg are not uncommon, though obviously in such a large group species vary considerably. They swallow prey rather than biting pieces off it. They do not have many teeth on the edges of their jaws, but they have heavy crushing tooth plates inside the pharynx. They habitually eat fish, octopuses, and crustaceans. They lie in wait, rather than chasing in open water. According to the film-maker Graham Ferreira, there is at least one record, from Mozambique, of a human being killed by one of these fish.

Their mouth and gills form a powerful sucking system that sucks their prey in from a distance. They also use their mouth to dig into sand to form their shelters under big rocks, jetting it out through their gills. Their gill muscles are so powerful that it is nearly impossible to pull them out of a cave if they feel attacked and extend those muscles to lock themselves in.

There is some research indicating that roving coral groupers (Plectropomus pessuliferus) sometimes cooperate with giant morays in hunting.