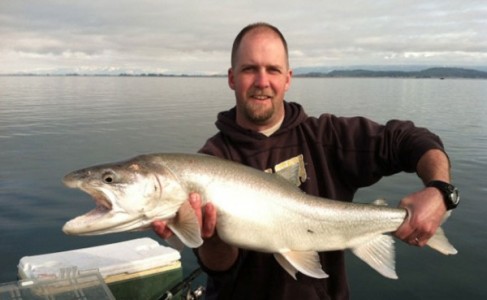 Two hundred nine lake trout anglers have turned in a total of nine thousand thirty one fish in the 2012 Spring Fishing Event on Flathead Lake.  Friday entries were seven hundred forty seven, Saturday’s sunshine brought out many anglers who caught a lot of fish with a total of one thousand five hundred thirty five, and Sunday’s blustery wind, rain, snow, and high waves took it toll and kept the total to six hundred. The third weekend total came to two thousand eight hundred eighty two.

Mack Days are sponsored by the Confederated Salish and Kootenai Tribes and sanctioned by Montana Fish, Wildlife, and Parks.  Up to $150,000 in cash and prizes are available to anglers who turn in from one to several hundred fish. There are tagged fish with values from $10,000 to $100- bonus awards depending on an anglers total at the end of the event-plus several other different prizes are given to the anglers.  Other prizes are the top ten angler prizes, captain’s prizes, youth and ladies division prizes, weekend prizes, smallest fish, largest fish, and fifty lottery prizes from $1,000-$200 are drawn from the tickets anglers receive when they turn in lake trout entries.  All it takes is one fish to win.

Randy Hovet from Charlo-fished all day from shore on Friday turning in two fish-one which was a $500 tagged fish. Joe Schrader-Kalispell took his daughter fishing from his boat on Saturday, she caught 10 fish-one of them was a $100 tagged fish. Sunday was her brother Adam’s turn to go fishing, he caught four lake trout-one with a $100 tag-and to top it off Joe caught a tagged one also. Scott Mahlen turned in two $100 tagged fish on Saturday that were caught at the same time-one on a jig and the other on a fly.  Turning in a $200 tagged fish was David McDaniel-Polson.  Other $100 tags were turned in by Larry Schmill-Missoula, Scott Bombard-Missoula, Karl Weeks-Columbia Falls, and Bill Swaney-Pablo.

We remind everyone to always be alert of the weather changes and have proper safety equipment on board. Know your fish ID before going out.  Bull trout and westslope cutthroat trout are illegal to keep on Flathead Lake.  Go to the website for information on how to identify them or contact your local FWP or CSKT Fisheries Dept. for information.