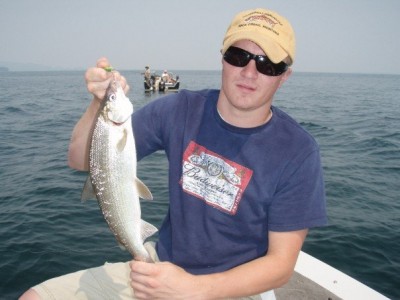 Optimistic for the Whitefish Bite: Captain’s Column
By Kjel

If you are an angler that loves to fish whitefish on Flathead Lake then you are waiting in anticipation for news to come that the whitefish bite has returned. This is the first time in a in a few years that folks are cautiously optimistic that the famed bite will be back.

One of the reasons for this optimism is because when the perch spawned this spring they weren’t hit with any adverse weather that might affect the hatch of their young of the year perch. The young of the year perch are the forage fish that school up and head for shallower water, normally 30 feet, and then the whitefish also follow them in large schools to feast on this relatively easy prey. That’s why most anglers that fish for whitefish have a lot of success anchored in about 40 to 50 feet of water jigging a rattle-d-zastor tipped with a maggot.

The whitefish bite normally begins around July 20th and runs into September, if it happens at all. Big Arm and Elmo Bay located on the west side of the lake have been popular spots for the bite to begin. Later on in the first part of August spots on the lake by Rollins on the west side and Woods Bay on the east side and then River Delta on the north end of the lake starting to produce catches of whitefish.

Jim Vashro FWP’s Fisheries Manager for Flathead Lake sent an e-mail that explains in part why he thinks the whitefish bite will once again return to Flathead Lake.

“Lake Whitefish are one of the most abundant fish in Flathead Lake but they are generally scattered and deep. That changes in years with good perch hatches. Large schools of young perch move near shore in mid-summer and whitefish schools move in to cash in on a great food source. Our theory is that weather during perch spawning and hatching, roughly mid-April to mid-May, determines perch year class strength. Strong cold fronts produce a drop in air and water temperature with accompanying strong winds. The fronts can stop spawning in its tracks and the changes can kill or dislodge perch eggs stuck to vegetation in shallow water. 2004-2007 had relatively mild springs. 2007-2011 saw one or more very strong cold fronts each spring with air temperatures dropping to the mid-20s and wind speeds up to or exceeding 30 mph. 2011 was hit even harder by high water outflows that may have flushed what few perch hatched and continued cold weather into June that delayed zooplankton development and starved what few young perch were left.

This spring saw good numbers of perch spawners and the spawn appeared to be steady. We’ve had a few windy days but nothing over mid-20s for mph and temperatures have been in the 30s or above. I would say the signs point to a good or better lake whitefish fishery in  Flathead Lake  this summer. We’ll see by mid July if I’m eating whitefish – or crow”.