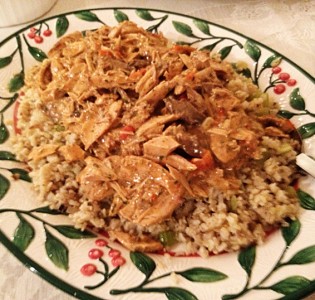 Grouse With Brown And Wild Rice
By Hookemharry

The breasts from two grouse – cut into bite size cubes

Add the two cups of rice into four cups of boiling chicken broth. Lower heat to a simmer and cover. Cook for an hour or until the wild rice mixture is tender. Remove from heat and keep covered until ready to use.

In a large non stick skillet add the onions, bell pepper and mushrooms. Cook for five to seven minutes on medium high heat. Remove from skillet and coat the grouse with the half cup flour and cook until browned on all sides then remove and add to the onion mixture. Next take the corn starch and add to the cold cup of broth and mix well and salt and pepper to taste. Add this to the same skillet and cook, stirring constantly until thickened. Place the rice mixture on a large serving platter and pour the grouse onion mixture over the rice. Lastly ladle the gravy over the top and enjoy with a tossed salad.