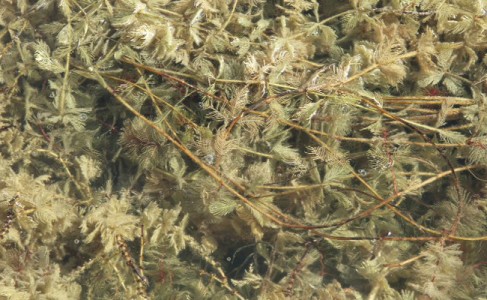 There’s a aquatic invader quietly taking over the back bays of Fort Peck Reservoir — Eurasian watermilfoil. The plant, first discovered in the Dredge Cuts below the dam in 2010, has now spread across the 134-mile reservoir. Last month, the U.S. Army Corps of Engineers applied herbicide at three test sites on the lake and Dredge Cuts to determine the best way to fight the weed. Results of the applications should be available in six to eight weeks, according to Patricia Gilbert, who led the effort for the Corps. Unfortunately, now that the plant has spread so widely, the only thing to do is keep it at bay where people recreate — at boat launches, recreation areas and marinas. The aquatic invader will never be eradicated from the reservoir now that it has taken hold.

To read the complete story, see the Sunday Outdoors page in The Billings Gazette.  And check out www.BillingsGazette.com for other outdoor news.

This post was provided by Brett French, The Outdoors Editor for The Billings Gazette.