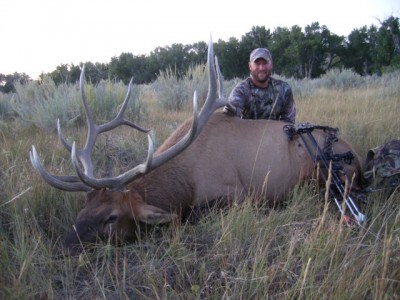 Richard Brock punched his elk tag and shared his story with MORS.  Read about his epic adventure below:

I floated the Missouri breaks for several days, hitting the cotton woods and willows along the way.

All week it was hot, in the 90’s. The elk would start bugling at dark and continue all night long until just before day break, then it was dead all day long. At least the fishing was good during the day. But there was a short window at twilight that I was able to get close to several elk.

One bull was at least 350, but I just couldn’t get close enough for a shot. I passed on two smaller bulls ,since I knew that this area has potential for better animals.

I had moved to a new location at mid day and set up camp on the river bank. I headed out about 6:30 a.m. to get a look at the new area, since I had not been there before. As soon as I cleared the willows on the river bank, I heard a bugle across the sage flat at about 300 yards.

I got in a good position next to a big cottonwood with the willows at my back and the wind directly in my face. The bull was bugling very freely on his own and I gave him a soft cow call, He cut me off. I waited a few minutes and he bugled several times then I gave him another soft call and he cut me off again. I could see his antlers moving back and forth across the sage flat.

After several years of elk hunting and turkey hunted all across the country, I knew he was trying to lure me out in the open and come to him. Having made that mistake before I increased my calling. I gave several different calls together, to sound like a small herd.

Because the river was behind me, I figured he would think the cows were headed to the water. The trick worked and he came at a trot directly to me, bugling the entire way. He stopped, facing directly at me at 20 yards. He bugled twelve times (I counted) right at me. After what seemed like an eternity he got a little cautious and turned to walk strait away.

That was a perfect opportunity to draw my bow, but how could I get him to give me a shot. At full draw ,I wiggled my foot a little and he spun around just enough to give me a quartering away shot. When I touched the release, I saw the arrow disappear just behind the last rib and heard that distinct sound “whopp.” He turned and casually walked away. Of course, the adrenaline and emotions were high and I instantly thought that I had missed, judging by his lack of reaction. I looked down at my watch, it was 7:23 a.m., and looked back at the bull. He was getting lower in the sage and I thought he had just stepped down in a little draw. I stepped up on a fallen log and saw his antlers lay over and he made a loud groaning sound. I watched the antlers through my binos and gave him a loud cow call, no movement.

I looked at the watch again, 7:24 a.m. The standard is to wait at least 30 minutes especially on a questionable shot but he was down and out less than 100 yards away. With only a few minutes of light left I decided to move a little closer and see if there was any movement. As I got closer, there was no question he was dead but, I had an arrow ready just in case. The arrow went in behind the last rib and had dead ended center of the heart.

I couldn’t get my pack off and bow down fast enough so I could get my hands on this Missouri Breaks Monster. After a few quick photos before it got dark I went to work right away. All night long the coyote’s were howling and bulls were bugling. I set the last pack down next to camp at 4:00 a.m. which was only about 500 yards from where the bull laid down.

Two real take a ways from this hunt, pass the smaller bulls, they don’t get big if you shoot the first little bull that comes in front of you. The other is low impact camp. I was within 100 yards of elk for 7 days as they were bedded and feeding right next to the river. I always camped down wind and made very little noise during the day (except for the fish splashing at the end of my line). My bull green scored 320 gross and will make my forth Pope and Young entry to date.