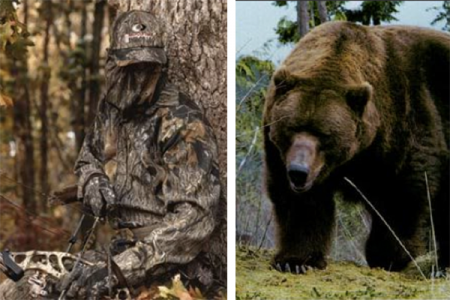 A Montana elk hunter was attacked by a grizzly bear while cow calling in the Beaverhead Deerlodge National Forest last week.

The day it happened was Friday, September 14th, when a man and his wife who were hunting off INdian Creek Trail in the Madison Range, and the man began to hit his cow call.

The couple heard a rustling in the brush about 15 yards away from them, and immediately thought it was an approaching bull elk. The rustling ended up being a female grizzly bear staring at him, according to MFWP.

The  grizzly bear jumped on the man and bit him in the arm and head before then backing off and running away. The man survived the mauling.

FWP Authorities say the grizzly was drawn to the hunter because they were both hungry, and both hunting elk. She had two young cubs with her at the time of the conflict, who she was trying to feed.

“These archery hunters were experienced and bear aware individuals. However, archery hunting carries with it the inherent risk of bear encounters – especially when imitating the sounds of prey. And while both hunters were carrying bear spray, it was not accessible given the swiftness and distance between the bear and the hunter at the time of the encounter,” the release from FWP states.

FWP always recommends that hunters be prepared to use bear spray, especially when calling for elk. This means having the spray within quick reach. They also recommend not running when you see a bear – play dead.

Information based on a press release from MFWP.

How to be Prepared for a Grizzly Bear Encounter

List of things you can do to be prepared in case you ever run into a Grizzly Bear while out in the field.

Get the full story