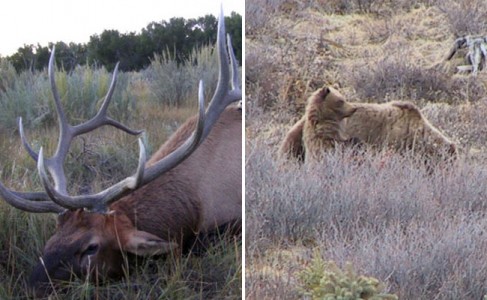 Be bear aware when your in the woods because the bears are especially active this time of year. There have been multiple encounters and attacks in the past week. A man is recovering from a black bear attack in the Bob Marshall Wilderness. Two grizzlies were captured near Red Lodge. Another griz was captured south of Whitefish. Also, an archery hunter was attacked by a grizzly bear in the Beaverhead Deerlodge National Forest.

Some monster bull elk have been harvested by Montana hunters. Shaun Plakke shared his story on the radio show yesterday, listen to it here.  You can read Bryan McCravy’s story of success on the first trip of the season. Richard Brock shared a great story of punching his tag in the Missouri Breaks. And Mark Anderson said he just got lucky.

On MontanaOutdoor.com, we are now accepting Fan Submitted Stories. We want to read and publish YOUR favorite hunting and fishing story. Submit your story here for a chance to win story of the month.

If you haven’t see the crazy Montana antelope with three horns, check out this picture.

The Twisted Tea “Hot Fishing Spot of the Week” is Flathead Lake for the Fall Mack Days. Although, be prepared to endure some smoky conditions.

Next Saturday, is the 14th Annual Goose Blind Broadcast. The Captain and Crew will be broadcasting live from a goose blind near you. If you plan on hunting, the morning of the 29th, join us on air and give a waterfowl report, call 1-800-568-5309.

Also, congratulations to Bob Burchett, of Havre, and Jordan Hofer, of Galata! They were the latest winners on the Kendall Four Seasons Subaru statewide trivia. Be sure to tune in to the Montana Outdoor Radio Show for your chance to win every Saturday morning.

Read, listen and win with The Montana Outdoor Radio Show and www.MontanaOutdoor.com.