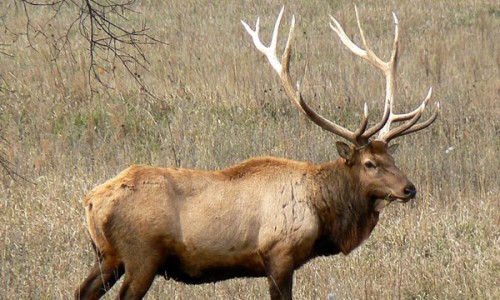 In less than one week, Montana’s general elk hunting season will open (October 20) and the five-week long season is expected to be a good one.  With any early season snow, harvest numbers may rise significantly.

Here is what Quentin Kujala, of Montana Fish, Wildlife & Parks’ wildlife had to say:

Most hunters are going to find elk populations in good physical shape and will benefit from liberal hunting opportunities. If the weather cooperates, and if hunters do their homework and line up access early where it’s needed, we’d expect very good harvest numbers by season’s end in late November. We’re all hoping the weather tips to hunters’ favor this fall

Here’s the FWP regional rundown on what elk hunters can expect this season.

Elk numbers are generally above the long-term average but the distribution and trend of elk populations raises concerns for the future. Calf production and survival is low in several districts along the border with Idaho and adjoining the Bob Marshall and Scapegoat wilderness areas, where opportunities to hunt antlerless elk are sharply reduced.  To allow bull numbers to rebound, a special permit is required to hunt bull elk in Hunting Districts 250 and 270 (Upper Bitterroot). Elk numbers generally remain high on private lands located east of Missoula, but calf survival was unusually low through last winter.

Overall, the milder winter of 2011-2012 led to good calf recruitment, and depending on weather conditions, the harvest could certainly see a notable increase from last year. A hunter’s best bet will be in the southwestern part of the region—and in the Helena area—where high numbers are being seen. The same applies to the Shields Valley where hunters should find a healthy population of elk. The upper Gallatin and the Paradise Valley elk numbers are down, while the number of elk in the Gravelly Range remains about the same as last year. The Pioneers and the Elkhorns are at or above average. A word of warning for next year, however: persistent drought conditions could play a factor in both the 2012 harvest and next year’s calf production.

Elk populations are solid. The biggest challenge for hunters, whether along the Rocky Mountain Front, central Montana’s island mountain ranges or in the Missouri River Breaks, continues to be finding access.

Biologists say elk numbers are at or above management objectives in most hunting districts. All elk hunting in the Bears Paw Mountains and the Missouri River Breaks is by special permit, which are awarded in the annual drawing. Elk in these areas are most often found in core-habitat areas a mile or more from active roads and other human activity. Hunters should note that elk densities are very low in the general-season hunting area north of U.S. Highway 2.

While not typically a hot spot destination, outside of Missouri Breaks, elk here are primarily found on private land. While elk populations are above management objectives in all hunting districts, public hunting access is limited.