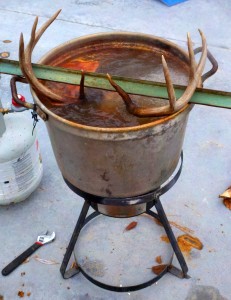 Do It Yourself European Mount
By angelamontana

Do you have the desire to mount your harvested buck, but you don’t want to pay a taxidermist a ton of money to do it?  A European mount, where just the skull is separated from the body with the antlers intact, is an affordable way to display your trophies.  Thanks to the internet, you can do it yourself at home!

Some of the items you will need to complete this process consist of the following:  A knife, a screwdriver and/or pliers, a pot big enough to boil the skull up to its antlers, hydrogen peroxide, Borax powder and clear coat.

Take a look at the instructions below, courtesy of ehow.com: 1 Skin the deer skull and remove as much meat and tissue as you can by hand, using the knife to remove the skin and help pry off the meat.

2 Prepare a pot of soapy water that is just full enough to submerge the skull up to its antlers. Place the skull in the pot and heat the water to a boil. Allow the skull to sit in the boiling water for 15 minutes.

3 Remove the skull and remove as much meat as you can–the boiling will help loosen the meat. Be careful to avoid burning yourself with water trapped in the skull.

4 Pour Borax powder into any hard-to-reach cavities and then empty out the Borax using a screwdriver to scrape it out. Repeat Steps 2 through 4 until the skull is fully cleaned.

5 Mix the magnesium carbonate and hydrogen peroxide and apply the mixture to the skull with a paintbrush. Repeat two to three times, if needed, to make the skull bright and attractive, rinsing after each application.

6 Spray the skull with a clear protective finish to help prevent discoloration after years on display.

7 Mount the skull to the plaque by screwing through the back of the plaque and into the underside of the skull.