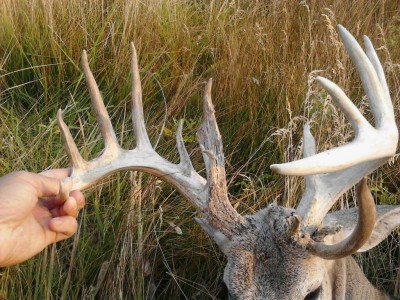 Dilan Saisbury from Helena, MT lives in Belgrade out in the Springhill Rd. area and has had huge success with his bow killing his first buck this year, but it wasn’t any ordinary buck, it was just the opposite. He killed a non-typical buck with 3 antlers right at home on his family’s homestead that he has greatfully been living at and has brought back to life with his wife Jessica. You can read his story below.

“I had seen this buck early this spring and he still had his left antler long after he should have shed it. As the summer came to an end, I saw him a couple of more times.

He still had that bleached white antler, but he looked like a pretty nice buck. Bow season opened and he was the one I was after. One evening after work, I got my bow and headed down to an alfalfa field where he was coming out of his bedding area to feed. I was able to get a shot on him at 65 yards. He was hit a little back so I eased out. I found him the next morning, right where I left him.

He was the first buck I’ve killed with the bow.”