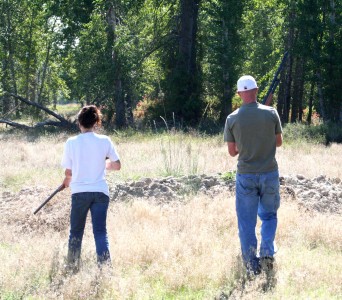 There is a pheasant farm in Hamilton, Montana called the Fetch Inn that my hunting buddy and I decided to check out a couple of years ago.  I had shot a few 12 gauge shotguns before, but never a 20 gauge.  Of course, I was given a 20 gauge shotgun to use.  I felt confident enough with my abilities to get a pheasant with this foreign-to me-gun, though.

So, off we went–my buddy with a 12 gauge and me with a 20 gauge.  We hopped in a truck with our guide who had his bird dog loaded in a crate in the back.  About 10 minutes later, we pulled up to a spot in the bushes where we unloaded.  The walk began.

This is the bird dog getting so excited to find a pheasant, but never actually finding one…

All I could think of was the Duck Hunt game on old school Nintendo.  I was awesome at that game.  This should be a piece of cake.  “There’s a pheasant!” is the phrase that brought me back to reality.  My heart was pounding!  I was about to get my first pheasant!  I watched it take off from the brush and BAM!  I got it!  Wait…I did get it, right?  Darn.  There it went.  I missed.

Okay, so I let my buddy shoot at the next one.  He was a Marine, and was an amazing shot, so I knew he’d get his.   Once again, “There’s a pheasant!” brought me back again.  He shot it!  Wait…he did shoot it, right?  The bird dog ran around in circles and looked at us curiously wondering why there wasn’t a bird.  How did my buddy miss that?

This happened two more times to each of us before we were done with our hunt.  What on earth was going on with us?  How could we have missed…twice…each…with shotguns?  The second bird I shot at was no more than 20 yards away from me!

So, the point of this story is to prove that the experience of our first pheasant hunt was still pretty awesome, even though we weren’t successful.  We may not have mounted pheasants on our end tables, nor do we have pictures with any post-hunt pictures with pheasants in them, but, the experience is one that neither one of us will ever forget (nor will we live it down).

Don’t be disappointed if you don’t get the animal(s) you’re hunting right away, enjoy the experience you had during your attempt(s).  There is always next time! 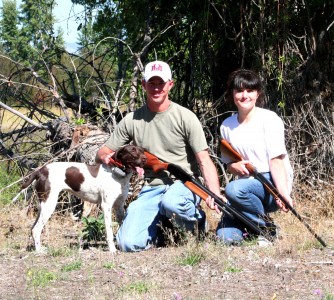 Notice that our post-pheasant hunt picture has no pheasants? We are still smiling, though!