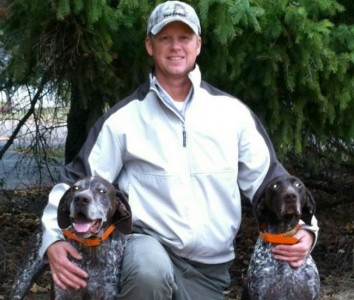 The MORS crew received an e-mail from Mike Milodragavich, of Missoula after this wolf story was posted. The www.startribune.com reported two animal protection groups, in the Great Lakes region, want the grey wolf back on the endangered species list.

Well, on October 11th, another story from Minnesota ran about a grouse hunter who had his dog chased by a wolf and he ended up shooting the wolf. 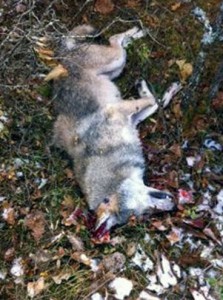 This is a gray wolf that was chasing a dog last weekend in the Huntersville State Forest in Wadena County. (Photo courtesy Minnesota DNR)

With only seconds to react, Finck had to protect his dogs.

Here is an excerpt from the story written by Doug Smith in the Star Tribune:

Finck collected Sage and his other dog, Cody, which had been working the woods nearby, and hiked a half-mile back to his truck. He and his dad, Dick, 61, had split up, and Dale reached him on his cellphone.

They immediately called the DNR to report the shooting. Hunter came to the scene and investigated.

Here is an excerpt from another story in the Park Rapids Enterprise:

According to her official report on the DNR website: “(She) took a call from a grouse hunter who had shot a timber wolf that was chasing his hunting dog. The dog ran back to the hunter with the wolf on its heels. The hunter shot the wolf at about 8 yards with bird shot as it was coming directly at him/his dog. Proper measures were taken by the hunter to notify the DNR and enforcement action was not necessary. It was a frightening experience during a grouse hunting trip that will not soon be forgotten.”