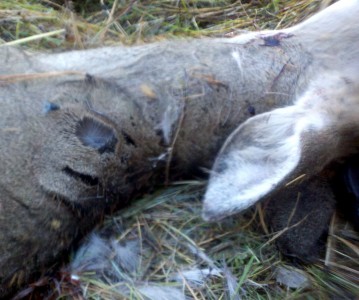 Randy and Coral Maxwell received a call on Sunday afternoon from their neighbors about a buck that was killed and covered up in the back of their neighbor’s yard in Darby, Montana.   Their neighbors were unsure of what type of animal would cover up their kill, so they called the Maxwells for any ideas they might have.

Randy and Coral’s first thought was that it was probably a mountain lion or a bear.  They knew of a bear that hung out in the draw behind their neighbor’s house, but it seemed more cat-like to cover up the kill.

They ended up going to the neighbor’s house to investigate the site in person, as they were concerned about having a predator around with their young grandchildren living less than half a mile away.

After studying the deer up close, the claw marks on the neck and down its back brought them to the conclusion that the mystery predator was a mountain lion.  It was instinctive to look up into the trees and visually scour the area.

This discovery made the Maxwells reconsider which type of animal(s) had been recently killing fawns in their fields, as they had previously assumed coyotes were the culprits.

Let us know at The Montana Outdoor Radio Show if you agree that this looks and sounds like the work of a cat.