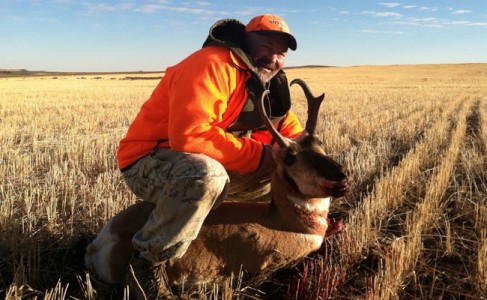 Opening Weekend Antelope Report from The Captain
By Matt Schauer

My brother, Dan Ward from South Dakota, traveled with me to hunt antelope on opening weekend.  After we’d just gotten back from our Canada goose hunting trip.

This year, I was lucky enough to draw a tag in the 700 hunting district, after not getting one last year. I experienced first hand why FWP has drastically cut the number of antelope tags, in 700, after hunting a couple of days.

The antelope were few and far between. Certainly not like the numbers I had experienced before the big snow and winter of a couple of years ago.

I did however spot a small buck with a herd of 8 does. I figured if I wanted meat in the freezer, I better take advantage of the opportunity when it presented itself.

It was fun to see some of the friends I have not seen in while, including Casey and Annette Thomas and their two boys who live in Jordan.

We stayed at Connie and Marvin Loomis’s house. Marvin and Connie arrived Sunday afternoon after returning from an EMT training session they attended in Helena.

It was the first time that Dan had a chance to see the Missouri River Breaks. And he was impressed because it is quite a change from the flat farmland of eastern South Dakota.