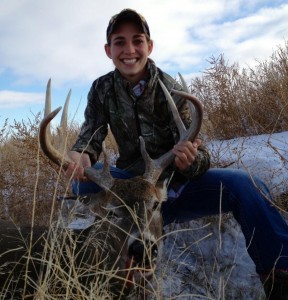 The Story of The Beautiful .243 Weatherby Bolt Action Rifle – Montana Hunting 2012
By Kelsey

Cassie Peters is a tough girl from Conrad, MT and she had quite the successful yet thrilling hunt for her buck of this 2012 Montana Hunting Season. She has always been a winner in all sorts of competitions from gopher shooting to jitter bug dancing while growing up on her family’s wheat farm. I had the pleasure of gopher hunting with the gal and shooting a gopher right in the throat a few summers back. Her story is told by her .243 weatherby rifle in how she obtained the kill in good old Conrad.

Once upon a time there was this beautiful .243 weatherby bolt action rifle and all it wanted to do was shoot a deer that had a fabulous rack. Now this gun did not want to stray to far form home because it preferred to hunt with its owner the amazing Cassie Peters.

Now one day this gun went for a little drive with its owner and her dad, when they ran into a small herd of whitetail bucks. Te gun really wanted to put one of them down but it was not confident shooting over 300 yards.

So the sneak was on. Step by step slung over Cassie’s shoulder, the gun began to creep down a small dip in the land. There belowstood 6 deer but the best one sneakly went and bedded down at the base of a small knoll. Closer and closer the gun got to the deer and finally decided it was time. Cassie steadied the noble gun as best as she could but her heart was racing making her shake. BOOM! went the first shot. The gun was a little nervous and the bullet hit the ground in front of the buck but yet he refused to move.

Cassie’s dad told her to calm down so BOOM! went the second shot and down the beautiful buck went. The .243 weatherby was very pleased by his performance and is again ready for next year so he can try his luck again at the ever playing game of montana hunting.