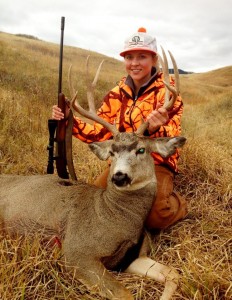 Abby Jo Stensland is a Missoula native who has quite the lucky hat, or really, she is just a natural! Here is her opening day story:

I haven’t always been much of a hunter. I took hunters safety about ten years ago and never was very interested until three years ago when my dad and brother talked me into giving it a shot. I didn’t think I would like it at all, in fact, I was convinced I would cry if I ever shot anything. After I shot my first buck, I was shocked at the adrenaline rush and amazing feeling that I had never experienced before.

This was my third year hunting with my dad and my third buck I have shot in a row, wearing my lucky hunting hat that was my Grandpa’s. I found this hat in a box at my grandparents house my first year of hunting and have worn it hunting ever since.

This years opening day of deer hunting season was a success right out of the blocks. We arrived just before sunrise and began scouting the area as the sun came up. As we came to the top of a hill we saw a whole bachelor party of 8 bucks walking along the edge of the coulee and luckily they didn’t see us. We began to sneak up on them and just as we stalked them a little further we came upon three bucks that had stopped a few drainages over.

The sneak has always been my favorite part of hunting, the build up of emotions until you finally aim and pull the trigger. We army crawled to the top of the nearest hill where we were in sight for the kill. My dad said if he turned broadside to make the shot and it wasn’t long before he did and I fired at him and was happy to see him go down!

By 8:20 a.m. on opening day my tag was filled with my biggest buck yet, a five-point! I got the hunting bug and I can’t wait to go out again next year, hopefully for an elk!