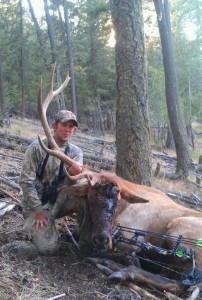 It started out as a typical day of hunting elk for Justin Richardson, of Darby, Montana.  He had spotted a bull around 8am, just outside of Darby, and he was immediately intrigued.  This bull had a set of antlers, but was non-typical.   According to Justin’s mother, Kathy Richardson, Justin said, “He was a pretty cool looking bull, and the other antler was a spike, but about 3 feet long that came down across his nose and to the other side.”

As Justin watched, a fight began with another bull that resulted in “his” bull’s spike antler being broken off.   Justin was not deterred by the bull’s new look and concluded he was still worth chasing.

Later that day, Justin successfully shot this bull with his bow.   Unfortunately, after searching that evening, the other antler wasn’t recovered, but Justin was thrilled with one antler his bull did have.