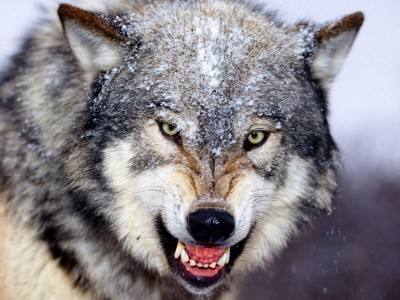 Wolf Quota More than Halfway met in Wyoming
By angelamontana

According to a release from the Associated Press (AP), the wolf quota for the state of Wyoming has been more than halfway met.  See the AP release below:

CHEYENNE, Wyo. (AP) — Hunters are easily on track to max out their kill limit for the first wolf season in Wyoming since the animals were reintroduced to the Yellowstone region in the 1990s.

That contrasts with Montana, which fell well short of its statewide limit last year and in a couple months is about to supplement hunting with trapping to help achieve its wolf population goals.

A trophy game season for wolves in the northwest corner of Wyoming outside Yellowstone and Grand Teton national parks began Oct. 1 and ends Dec. 31. As of Tuesday, hunters had killed at least 27 wolves in that area toward the season limit of 52 animals.

Three wolf hunt areas in northwest Wyoming were closed to further hunting after kill limits in those local areas were reached. Might the limit for all 12 areas be reached by year’s end?

Neither Idaho nor Montana has statewide wolf limits this year. In 2009, both states’ inaugural wolf seasons were cut short by a judge who suspended them. Montana and Idaho initiated their first full wolf hunting seasons in 2011.

In Wyoming, wolves were removed from endangered species protection for the first time in August. Of the three states, Wyoming is the only one with “dual classification” for wolves. In most of Wyoming, wolves can be killed on sight, without a license, any time of year.

In northwest Wyoming, wolves are classified as trophy game subject to licensed hunting during the new hunting season. Wildlife managers intentionally set a low limit for the first hunt in part because Wyoming has fewer wolves than Montana or Idaho.

“Also, this being our first season, we wanted to approach it fairly conservatively and be able to adaptively manage in the future based on how this first season goes,” Keszler said.

In Montana, hunters killed 166 wolves in 2011, far short of that year’s limit of 220. Montana ranchers and others eager to control the state’s wolf population looked to Idaho, where trappers helped reduce that state’s total estimated wolf population by at least one-third over a 10-month hunting season that began in August, 2011.

About one-third of the wolves killed were taken by trappers. Inspired in part by that success, Montana’s first wolf trapping season is scheduled for Dec. 15 through Feb. 28.

Wolf trapping could be introduced in Wyoming, depending on how this year’s hunting goes, but no decision about wolf trapping has been made in Wyoming yet, Keszler said.

More than 4,000 hunters have bought wolf licenses in Wyoming. Nobody has surveyed them, Keszler said, but it appears few have headed into the field specifically to kill a wolf.

“I think a large portion of people that are picking up a wolf license are in the area hunting elk or deer or something like that,” Keszler said, “and have picked one up just in case they see a wolf, as well.”