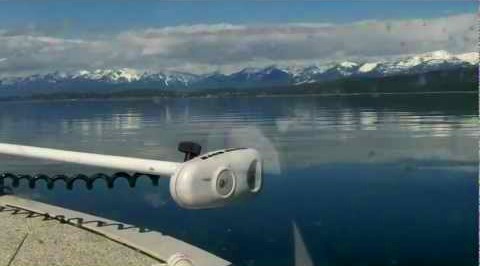 We just received the final update from the 2012 Fall Mack Days fishing tournament at Flathead Lake!  See below:

2012 Fall Mack Days ended after a grueling last week of the events twenty eight days.  Frigid windy winter weather set in the last six days of the fall fishing event.  Ice freezing on the boats and equipment was a concern that all anglers had to deal with.  The few that continued the last few days were out in some of the coldest days on the water during any of the Mack Days Events.

Two anglers were recognized with Spirit of the Event Awards.  Custom made fillet knives were given to Scott Bombard and Mike Benson for their support and dedication to the events.

Bryan Gregerson-Kalispell-with nineteen entries in the lottery drawing was a lucky winner of $1,000.  Terry Krogstad-Kalispell-$1,000 -was also a top draw. Jeanee Mooney-lady angler from Missoula-won $950.  Other winners of $950 were Richard Kreis-Huson and Steven Benson.  Tyson Cottet-Charlo-was a $900 winner along with Max Martz-Missoula angler.  There were fifty lottery drawings that went down to $200 with several different anglers winning prizes.

Mack Days Events are sponsored by the Confederated Salish and Kootenai Tribes and are sanctioned by Montana Fish, Wildlife, and Parks.  The events are used to slowly reduce the numbers of non-native lake trout in Flathead Lake.

One hundred eleven anglers split $13,000 in tagged fish awards during the event.  There were no high dollar tags caught.  Top award for a tagged fish was $500.

No large lake trout over 36” and 24 lbs. was turned in during the Fall Event which has happened several times before.

Mack Day Events are made successful by the dedicated hard working lake trout anglers who participate.  We would like to thank each and every one of them.  We continually work on improving the events and would like any comments or suggestions sent to us.