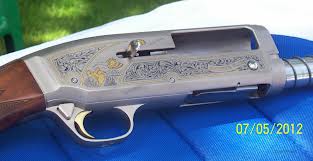 Auto Loading Shotguns – A Lesson from Colonel Smoothbore
By Kelsey

It’s time now to continue our look at auto loading shotguns. Today, most autoloaders gas piston driven. That means that some of the gas generated by burning powder is used to cycle the action of the gun. The most common gas powered shotgun is the venerable Remington 1100. Introduced in 1963, the 1100 set the standard for gas operated autoloaders. It reduced felt recoil, lowered the gun’s weight, and provided excellent reliability. In fact in 1978 a LT-20 1100 set a record for gas operated autoloaders that still stands. Over 24,000 rounds were fired without a single malfunction, parts breakage, and without a cleaning. Since then numerous attempts to break that record have failed.

Most gas operated autoloaders use ports drilled into the barrel to channel expanding gas from fired cartridges into a piston. The pressure on the piston cycles the action rearward ejecting the spent cartridge and recocking the bolt. A compressed spring at the rear of the bolt (usually housed in the butt stock) forces the bolt and its carrier forward loading a new unfired cartridge into the chamber, arming the gun for another shot. Most gas operated auto-loaders operate with this basic set-up. Two ports in the barrel band funnel gas to the piston. Piston and carrier design varies with firearms manufacturers. Remington has a new design called the Versa-Max that uses 7 ports located in the chamber area. Lighter loads such as 2 ¾ inch shells use all 7; 3 and 3 ½ loads cover some of the ports allowing the gun to handle just about any load available. It is a unique system that shows a lot of promise. 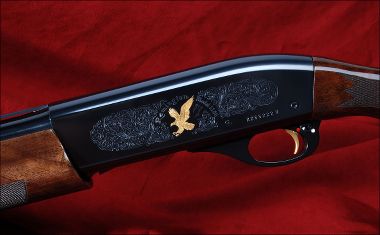 There are dozens of manufacturers producing gas powered autoloaders in literally hundreds of models, styles, and barrel lengths. Having owned Remingtons, Berettas, Brownings, and some others, I have to say my favorite gas autoloader is my Browning Gold Fusion. It has the softest felt recoil, and is the best balanced autoloader I have ever shot. A huge bonus is that nothing on the market is as easily cleaned as are the Browning and Winchester gas guns. It is my opinion they are far and away the best on the market.