This week we’ll finish our study of semi-auto or auto loading shotguns. We’ve looked at both recoil and gas operated guns and at how they operate, as well as the pros and cons of owning shotguns with those operating systems. Now let’s look at the “inertia” system shotgun.

This is the newest design on the market and there are not nearly as many companies producing these types of guns as there are firms manufacturing recoil and gas operated guns.

Benelli is by far the most famous of the manufacturers producing inertia guns. Benelli calls their guns “Inertia Driven” and also markets it under the Stoeger name. Browning now markets a similar system, known as “Kinematic Drive,” in the new version of the venerable Auto 5. Both systems operate basically the same.

When the gun is fired, a spring inside the bolt body is compressed by the forces of recoil, then the spring rebounds releasing the rotary bolt head from its lock-up and the entire unit reverses to the rear of the receiver. When the bolt stops its rearward motion, the empty hull is ejected, a new unfired cartridge is lifted up and then pushed into the chamber, the rotary bolt then relocks and the gun is ready to be fired once more. As with the other style operating systems, the entire cycle occurs in just a fraction of a second.

This system is very simple and efficient. There are fewer parts, the barrel is fixed in place and there is no spring or bolt carrier surrounding the magazine. 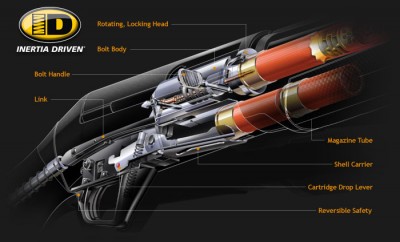 These inertia guns are extremely clean in their operation. There are no barrel ports, thus all the gas, unburned powder, and residue are contained in the barrel, most of which is ejected out the muzzle.

With fewer parts, the guns can be made lighter and because of the versatility of the design more configurations are easier to produce. The guns are well balanced and easy to carry in the field. The only real downside I can find with this style shotgun is the cost. On average, they are somewhat more expensive that gas operated autoloaders.

If you can afford the higher cost and can find a gun that fits you, an “inertia” auto loader just might be the shotgun for your lifetime.