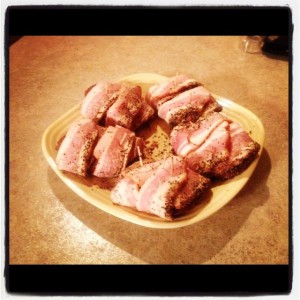 One night during my college days my comrades and I returned from downtown Missoula with inebriated fueled hunger and all gathered around the fridge.  As always, the first thing we did was remove a couple packs of elk meat from the freezer.  Then it was an iron chef marathon adding all sorts of seasonings making a mess only kindergarteners with cupcakes could create.  On this particular night, a light bulb of pure ingenious went off in my roommates mind. His exact words were, “DOODS…WE SHOULD WRAP THE STEAKS IN BACON!!!”  We all stood there in a drunken stupor for a few seconds pondering the idea and then in exact unison we yelled “DELICIOUS” I’m pretty sure people six blocks away heard our excitement for bacon smothered elk steaks! As we rummaged through the cabinets to find toothpicks to hold the bacon around the steaks our excitement grew.  As we applied our “fare from the gods” to the grill we were all slobbering like my lab at a hotdog eating contest.

When we finally tried the steaks, I’m pretty sure the bacon was burnt to a crisp (with the BBQ still on fire), the steaks were probably raw and it might have been the bear I killed that year instead of elk; but it was better than kissing a fifteen pound walleye!!! At that point in time, it could have been road killed porcupine wrapped in bacon and we wouldn’t have known the difference.  Not only did we get a glorious meat feast that night, but we created a page in a recipe book for a lifetime of meals to come.  This has been one of my favorite meals ever since our bacon burning treasure was found! I love bacon…I would eat crumbled bacon on my serial, bacon cake, bacon soda, bacon everything!!! In fact, when I was at the grocery store last night purchasing the bacon for the elk steaks the butcher said “oh shoot, I gave you a little more than the pound you asked for” and I replied “there ain’t no bacon gunna go bad in my house man!!!”

As always the dinner turned out wonderful. I am a pretty simple meat and potatoes kind of guy, but there are many sides that go well with the bacon steaks. My personal favorite is the steaks, boiled red russet potatoes, and corn on the cob. Like Lynyrd Skynyrd’s Mr. VanZant once said “Be a Simple Man”

Here are a few tips on making your Bacon Steaks a success:

1.)   Use thick cut bacon preferably from the butcher (I like the peppered bacon)

2.)   Use toothpicks to hold the bacon around the steaks (don’t forget to take them out!!!)

3.)   Lightly season the steaks before the bacon is applied. If using peppered bacon go light on the pepper.  I like to use salt, pepper and garlic powder.

4.)   Set the BBQ to LOW!!! Otherwise the local fire department will be putting out your BBQ fire. On low (300-400 degrees) I like to cook both sides for about five minutes each for medium rare.  This is going off your average cut elk or other game steak. For thicker steaks cooking times will vary.

5.)   The bacon will be blackened when the steaks are done. If you’re like me, I leave the bacon on and it’s mouthwatering goodness.  If you want to remove the bacon, the steak inside will be as tender as butter with a slight bacon flavor. Either way, DELICIOUS!!!

Hopefully this will give some of you a new twist on cooking your wild game.  And as always, cheers to “Jiggin’ the Dream” and BACON!!!