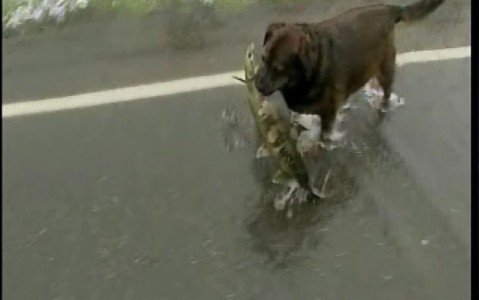 This is where I insert the joke “Why did the salmon cross the road? To escape the bloodthirsty dog.” Talk about a multi tool. Wouldn’t it be great if you could have a dog that was both good and retrieving birds and catching fish? In the following video you will witness THAT dog in action.

A dog was recently filmed pretending to be a Grizzly bear in Washington state by catching salmon. The Skokomish River frequently overflows and sometimes covers the road. This time it over flowed during a salmon run. Recently a video surfaced of a dog apparently named “Honey” catching salmon as they attempted to swim across a flooded road.

Talk about a strange game of fetch. Good Dog!