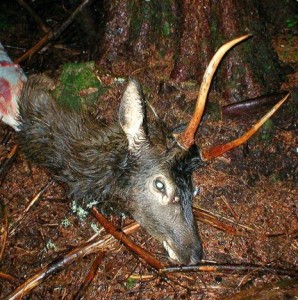 Elk Poachers in Washington State Caught in the Act
By angelamontana

Officer Martin was dispatched to the scene and found the poacher’s vehicle in a remote part of the area.  He then made it to the scene and witnessed two men cutting up and quartering the illegal elk.

“Oh no!” is what one of the suspects said when he realized Officer Martin was no more than 15 feet away, observing their illegal activity.

Oh no is right!  Not only were the suspects’ firearms and other evidence seized, but charges will also be pressed.  The elk was donated to local charity.

(picture courtesy of Washington Department of Fish and Wildlife Police)