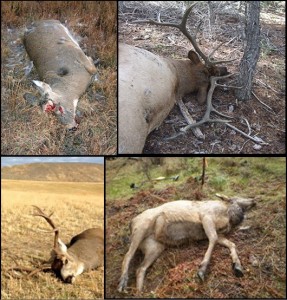 How Would You Punish a Poacher?
By angelamontana

With so many poaching cases being reported across the country, it is disturbing to think that so many people do not fear the consequences of their illegal actions.

It can be frustrating to ethical, law-abiding citizen hunters to see poachers disregarding the law and taking animals that are supposed to be protected.

According to a volunteer at the Darby game check station yesterday, the FWP received a call about some hunters shooting cows illegally in the area I was hunting.  They also received a call about whitetail does being shot and left in another area of the same district.  Also, it was reported that a hunter had shot a cow elk from the road yesterday, in that same area, and he ended up seeing a bull in the herd, so he left the cow and shot the bull instead.  Not to mention the mule deer poaching case posted earlier today–click HERE for that article.

Fish, Wildlife and Parks have their hands full with poachers, but they do their best to ensure hunters who partake in illegal hunting activities are punished.

How would you reprimand poachers if you had the authority to do so?