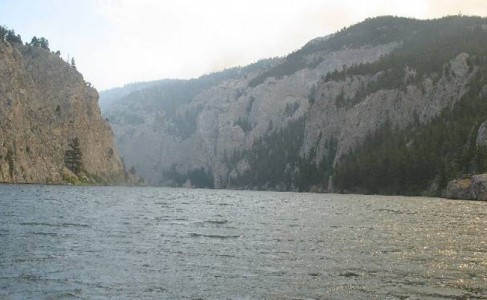 Trout On The Move In The MO: Helena Area Outdoor Report
By Matt Schauer

Hi, it’s Angie from Bob Ward & Sons, & here’s what the fish like to bite in the HELENA area:

The good ole MISSOURI RIVER is always ‘game on’ until the ice buildup gets to be too much, but so far, that isn’t in the forecast for the coming week! Might see a bit of rain, or even sleet, but looks like mid to upper 40’s for a while…the trout are still coming into the river from the lakes, making the MO between the lakes a very productive area, but it’s pretty much productive all over, whether at Headwaters or closer to Cascade. Baetis this time of year generally hold out for chillier weather, so the hatch hasn’t been up to snuff this week, (tho we hear if you INSIST on dries, near Craig is the best place for Baetis these days) & remember, you’ve got plenty of other options! When overcast, deaddrift your Zonkers with an indicator, or swing just about any color…folks say the fish are responding to all of them! Tan Fatheads, White Flash Fry, Fire Tiger Bellyache Minnow…all should be in the box! Nymphing looks solid in the afternoons with Hackles, San Juans, PMD Emergers or Scuds (we’re partial to the Hot Head Scud), szs 14-18!

Trout & Walleye, & the occasional Perch, are what’s happening on the Lakes…Buggers, Leeches, Worms or Scuds will all work…go down 35-ish to 40 ft for the bigger trout & walleye, & even deeper will gain you some Perch bite! East side of CANYON FERRY, HOLTER around the Dam, shorelines at HAUSER…these are the successful places right now. Many anglers are sticking to the rivers right now, where the larger fish tend to congregate this time of year, especially since the crowds are mostly gone…& waiting for the Lakes to freeze up, for the onset of ice fishing!

You got about a week and a half, a little less maybe, to get your deer or elk, so if you’re not on the water, head for the hills! Bagged your game early, & waiting for the ice fishing to come? Come on in the store & get in on a little early shopping, before the big crowds hit NEXT weekend! You know you can rely on Bob Wards to meet the needs of any of the sporting types among your family & friends, whether they fish, ski, hunt, climb, or hike! We’ll see you in the store, or outdoors! Back next week, friends!