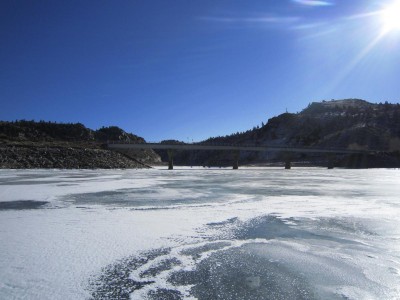 Snow in the Missoula Valley and Western Montana has finally arrived. If you remember in last week’s column, in my hope of getting Western Montana to look a lot like Christmas, I suggested a snow dance. Whether it was your dancing or old man winter finally coming of age this year, we got what I wished for. Snow and cold, so let the winter fun begin. Last weekend the activity at the ski areas picked up dramatically. Just about all of them are open during the weekends now and with more snow on the way, they all should be open for their extended holiday days through the first of the year.

The lakes that now have enough ice to walk on safely, drill hole through the ice and do some fishing have also increased. The nighttime temperatures east of the Continental Divide have made for good ice making, earlier this week as a cold front moved through. Temperatures as cold as 4 degrees below zero at Fresno, Tiber, Nelson, and Fort Peck Reservoirs have started to create a layer of ice on at least the bays in some of these lakes. It is a big change from just a week ago when anglers were catching fish on Tiber Reservoir on open water and in a boat.

Leonard Roberts, from Roberts Bait and Tackle, (406-454-1877) is a good source for finding out how thick the ice is on quite a few lakes in North Central Montana as well as how the fish are biting. Roberts keeps an ice board updated with reports he receives from anglers that have been out fishing. He also has a good selection of live minnows that are legal to use in many of the waters in north central Montana. The further east you go in Montana, to fish on lakes like Nelson and Fort Peck, I would recommend calling Robert Twiford (406-654-1611) out of Malta at Westside Sports, where he also has a good selection of live bait.

Closer to home, Chancy Jeschke, from Snappys (406-257-7525) in Kalispell, is a great source for ice fishing conditions and information on lakes located near Kalispell. Jeschke just recently made a post on the Montana Outdoor Radio Show facebook page that showed pictures of some jumbo perch he caught through the ice.

“A lot of the smaller lakes in the area have 2-4 inches of ice,” Jeschke said.

That might be a little thin for some anglers, but at least it’s a start to the ice fishing season.

Just keep in mind that conditions can change daily depending on the weather, so it is advisable to use extreme caution while on the ice.