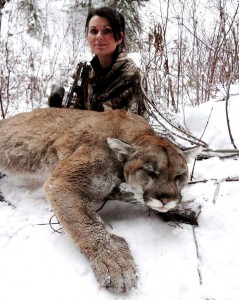 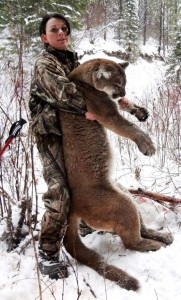 During Montana’s 2012 rifle season, my hunting crew and I were taking a break one afternoon, and we stopped by a friend’s place.

While hanging out there, we were introduced to a twenty-something year-old girl named Bonnie Small, who was brand new to hunting.   She had stopped by to bear hunt with a fellow hunter at the house, and that was the only time we had ever crossed paths.

Fast forward to last night–I was online scrolling through my Facebook news feed looking for some antlers, and I saw that same girl we had met that one day, holding a lion in a picture.

It turns out, this beginner huntress, Bonnie Small, not only got her first mountain lion, but she got it with a bow!  This was her first bow harvest, too!

With the help of Ben Wohlers, of www.PaintedRockOutfitters.com, Bonnie scored some pretty awesome bragging rights with this successful hunt.

Congratulations to you, Bonnie!  Great job!