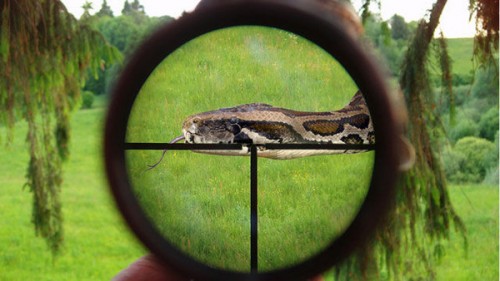 Do the cold January conditions got you down? Maybe you should take the advice from the migratory ducks and other waterfowl, and fly south. If you are having an itch for an extreme hunting adventure, you need to sharpen your machetes and bust out the cargo shorts and head to Florida.

A python hunting competition starting on Saturday is drawing hundreds of amateurs armed with clubs, machetes and guns to the Florida Everglades, where captured Burmese pythons have exceeded the length of minivans and weighed as much as grown men.

Python Challenge 2013, a month-long event sponsored by the Florida Fish and Wildlife Conservation Commission, is open to hunters and non-hunters alike.

But the idea of luring weapon-wielding amateurs into the harsh environment of the Everglades has raised some alarms.

“I just thought it was as exciting as could be. It’s a once- in-a-lifetime opportunity,” said contestant Ron Polster, a retired salesman from Ohio whose closest encounter with the swamp has been from the highway heading south for the winter.

Participants pay a $25 entry fee and take an online training course, which consists mostly of looking at photographs of both the targeted pythons and protected native snakes to learn the difference.

The state wildlife agency is offering prizes of $1,500 for the most pythons captured and $1,000 for the longest python.