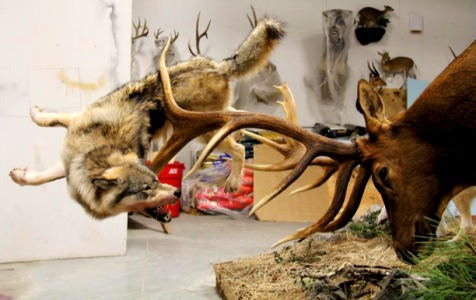 I’ve seen this picture going around the internet for a while now, and I have to say, it is a pretty awesome mount.  Whomever thought of this for a mount did a pretty darn good job of coming up with this scene!

One thing, in my opinion, that could make it more realistic  is if there were four or five wolves attacking him from the back, too.  It appears that there is another dog on the side, but I can’t see enough of the mount to see what it is supposed to be doing.

I wonder if the hunter who submitted these animals to this taxidermist actually killed the animals in a situation like this.  Nonetheless, this is still a really cool mount.