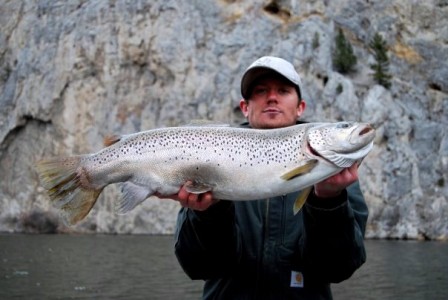 “Go Get that Big Fish!!” by Trevor Johnson of Kit’s Tackle
By angelamontana

Amongst being so busy I might have forgot how to jig fish…I randomly thought about a magical memory and had some great laughs and tears in tonight’s shower.   What brought this memory to mind was a friend letting me know one of our local lakes (Holter, the Gates of the Mountains) is ice free and fishable by boat.

Normally, I would be dancing around my house and trying to high five my pups at this rare mid-winter news…except the only jiggin’ Kit’s Tackle will be doing is meeting deadlines and filling orders.  But a couple years back, we had the day every true angler dreams of.  Dad and I had just returned from a trip to the Columbia River (which yielded us a walleye over 15 pounds and multiple other 30”+ on the trip) and were stoned on Jigging!!

We decided with the remaining day of vacation we had left we would hit the Gates of the Mountains and switch gears jigging for springtime trout with ultra-lights.  I must admit the Gates is one of the most magical places in my book of memories.  I can remember being so small I would curl up under the console of the Ol’ Klamith while dad, my great uncle Herb, and my grandpa “poppy”  would spend countless hours “Jiggin’ the Dream.”  I can still here my dad say, “see those guys, they are dragging it and not jiggin’ enough” and my grandpa “Poppy” would immediately chime in with his favorite saying “they must have gosh damn sawdust turds for brains.”

Already having a twenty plus fish day on big ripper rainbows, dad pitched his 1/8 ounce jig into the shallows and KAPOWOWRIPPINWOWBANG!!!  Then, before my very eyes, a whale sized brown trout came porpoising out of the water with dads jig in her mouth.  My exact words were, “holy crap dad, that’s a twenty pound brown” and he answered, “oh come on, it’s an eight or nine pound brown.”  I immediately fired back with, “I don’t know what the heck your smokin’ but that is a huge fish dad.”  All I can figure is the sun was in his eyes or he was trying to stay calm about the whole ordeal.  Yet to mention, also in the boat with us was my momma Marti and the dogs.

As you can probably imagine, it was like a Chinese fire drill with rods and gear flying everywhere…now I know where the saying “like monkeys humping on a door knob” came from.  After a few close calls, I had manned the electric trolling motor and we were following the giant sow.  With 4 lb monofilament line and a four and a half foot ultra-light rod we had no choice but to follow and PRAY!!  After getting her close a couple times we got a good visual on the jig and saw she was hooked outside the mouth…which gave us hope. Brown trout, although not as penetrating as Northern Pike, have a hell of a set of chompers on them!!

Approaching the fifteen minute mark on the epic battle, she was still not ready to succumb to our net.  As I remember, this was still one of the most memorable battles of all time. Dad and I were screaming at each other, the dogs were running around frantically, Marti was doing her best to stay out of the way (and not laugh at us), and the sow brown trout was giving it her all.

Finally, after a few more minutes, a few more curse words, and the giant brown almost getting away as it wrapped around the trolling motor shaft…she was in the net.  So excited I started dancing like I was in the final seconds of a hula-hoop contest, I looked back at dad and his eyes were filled with tears.  It was then I realized he had fished his whole life for this fish, this very brown in the net is what he had dreamed of since he was a child.

Although my prediction of twenty pounds was off…it wasn’t by much.  Dad and I carefully got some great photos of her before we placed her back home.   I have seen my dad happy and excited, but never in this fashion.  He was happy in a way only he could feel or explain to you.  Me on the other hand, I was in complete disbelief of the magnificent fish we got to place our hands on.

With this being a pretty random blog post, I am actually quite glad the memories of the story are now preserved in writing.  And even though it’s just the adipose fin of the story, I think you get the point.  I remember Dad looking up to the sky and saying a prayer to “poppy.”  It is father and son memories like these that make this whole darn thing so freakin’ cool.

So, rather your scenario is a father and son or a grandpa and granddaughter…go get that BIG FISH!! Or any fish for that matter, they all make a lifetime of memories.

Always and forever, “Jiggin’ the Dream”