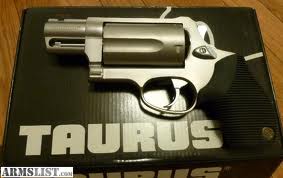 Handguns That Chamber Shotgun Shells with Colonel Smoothbore
By Kelsey

This week we’ll take a short look at handguns that chamber shotgun shells. We can classify these guns into two categories; personal defense guns, and those that are more appropriate for hunting, but can also be used for personal defense.

A couple of examples of personal defense guns are the Taurus “Judge” series of revolvers and the Smith & Wesson “Governor.” While there are other guns in this class, these two are the most common. We’ll take a more detailed look at these revolvers and their uses when we discuss handguns in future posts. Basically these guns will chamber and fire both 45 caliber handgun and 410 shotgun ammunition. They have rifled barrels and when bird shot is fired through them, the shot charge is subjected to not only linear forces, but also centripetal forces that cause the shot charge to disperse outward very rapidly when it exits the barrel.   My experience is that at distances beyond about 5 to 7 yards, the patterns are ineffective on game. One might be better off with a 22 LR trail gun for small game hunting.

The Thompson/Center Encore, Contender, and G2 Contender and similar guns from other manufacturers are handguns that fire shotgun shells through smoothbore barrels and are quite appropriate for hunting. Rossi also makes combination sets that include interchangeable barrels that chamber shotgun, rimfire, and centerfire ammunition. The T/C guns can be had in both 12 and 20 gauge and come in several barrel lengths. These are excellent firearms that with the purchase of extra barrels can be used for just about any purpose a shooter can think of. These guns are quite handy and compact. They work really well in the tight confines of a turkey blind, and make for a decent defensive tool when loaded with buckshot or slugs. The major drawback is that they are single shot guns.

Shotgun shell firing handguns are a very small part of the world of shotguns, but they fill a unique niche for many shooters. But before buying one of these guns, the user should consider the limited uses for the guns and the fairly strong recoil that comes when firing shotgun ammunition through a handgun. I suggest that you get some experience with larger caliber handguns before purchasing a shotgun “hand cannon.”