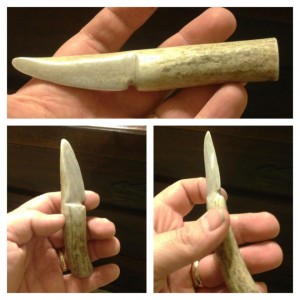 Knife AND Blade Made from Antler
By angelamontana

Crazy Bone Hunting’s Facebook page recently posted a picture of a knife made out of antler.  You may see knives made from antlers quite often, as a lot of people use antlers for the handles of their custom knives, but I don’t think I have ever seen a blade made out of an antler.  Jerison, the knife-maker and also an administrator for Crazy Bone Hunting’s Facebook page, said that the knife is very sharp, but he isn’t sure what he will do with it.

He also stated, “The antler was kind of blade-shaped already, so I figured it would be dense done all the way down to the knife edge.  A regular round tine wouldn’t work unless it was axis antler maybe.”

I can see how the shape of the antler is important in turning the knife into a functional blade.  What a really cool idea, even if it is never used.

It turns out, the Crazy Bone Hunting crew also makes jewelry, accessories, home decor and more out of antlers, including, but not limited to, coin settings, necklaces, rings, light fixtures and decorative antler crosses.  They sell their merchandise at shows just twice a year.