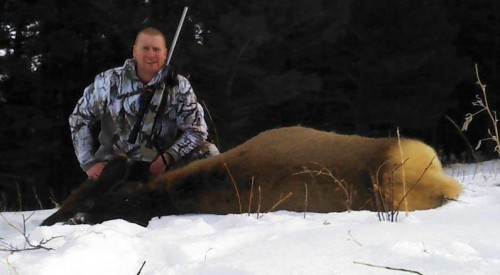 Lance Jones and his wife drew Game Damage Hunt tags this year, and Lance got his cow elk on his first day out hunting with this particular tag, which was just a couple of weeks ago.  His wife has not filled her tag yet, but that might change this weekend when they head back to the area where he got his, just south of Drummond, Montana.

The following story describes Lance’s elk hunting experience in his own words:

I had seen elk a couple days before just outside some trees, a couple miles from the road–about 300 head.  So, that Saturday I headed to the same place.  The elk were just out of the trees again, this time a mile or so East of where they had been before.

I started making my way toward them, but another hunter was ahead of me, but approaching the elk from the ridge East of the bedded elk.  Before I could get within a mile, the elk made their way into the trees.

The other hunter went into the trees about thirty minutes behind them. So, I kept skirting the tree line until I heard his shot.  About ten minutes later, eight or ten cows and spikes ran out of the trees, and I was able to take my cow.

Lance ended up shooting the cow at about 180 yards, and he dragged it back to his truck on a sled.  See his video clip below that shows gives you an idea how far away his truck was parked.

Check out Lance’s other elk hunting success “The Story of the Big Bull from Big Timber” HERE.

More information on Game Damage Hunt tags can be found by clicking HERE.