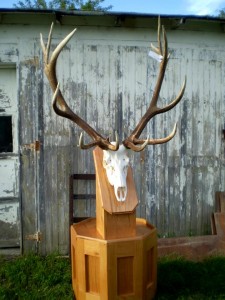 Richard Demler, a Michigan taxidermist in the upper peninsula, recently told me a story about a bull elk he was cleaning up for the Michigan DNR.  It turns out the story on this bull is an interesting one.

A Michigan hunter was passing through Montana on his way back from hunting out west and found a bull elk on the side of the road.  He assumed it had been hit by a vehicle, and, without knowing the Montana state laws, he decided to take the head.  A passerby saw this and stopped to tell the out-of-stater that it is illegal to remove any part of animal that is roadkill from the side of the road.

This warning did not deter the man, and he still ended up cutting the head off and loaded it in his vehicle.  The passerby had gotten the man’s license plate number and reported him to officials.

The bull was eventually traced back to Richard Demler’s taxidermy shop, where the man had sent it to be cleaned when he got back to Michigan.  The Michigan DNR then confiscated the bull skull and antlers and contatcted Montana Fish, Wildlife and Parks (FWP).  Montana FWP ended up donating the trophy bull to the Michigan DNR to be used for education purposes.

Richard Demler ended up with the mount AGAIN, as the Michigan DNR wanted it to be cleaned up for display.  A friend of Richard’s ended up building and donating the pedestal, and the bull elk is now shown at all the DNR outdoor functions.

What an interesting chain of events.  Thank you for sharing this story, Richard!